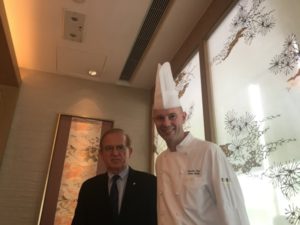 The gal is really rather proud of Island Shangri-La, Hong Kong. One of three hotels towering above the city’s massive Pacific Place retail centre it is, like its sibling Conrad Hong Kong, taking food very seriously. Whenever the gal goes into the 565-room luxury hotel all its restaurants, bars, and sitting places seem to be packed (international communicator-turned-Phuket-developer Susan Field could not even find a proper-height seat anywhere, a couple of nights ago, and ended up at a high-up communal table in the Oyster Bar). Part of this hotel’s success, from its 1991 launch, has been its succession of really good GMs. 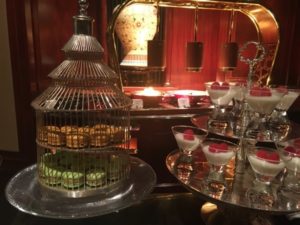 Cocktails in the Horizon Club

The line-up would include Dario Regazzoni, Didier Picquot, Giovanni Angelini – still as busy as ever, now chairing his own company – Symon Bridle (now COO New World), Bruno Brunner, Darren Gearing (taking a break from mainstream hotels, for a while) and Wolfgang Krueger (now area VP for all Shangri-Las in this part of the world). In charge of the hotel today is one of the world’s most humble but passionate hoteliers, Franz Donhauser. He grew up in an Austrian hotel that had been in his family for three centuries, and all he wants to do now is run this hotel. No corporate life for me, he says firmly. And he is so proud of his team, the newest member of whom is my long-time friend Adam Mathis, who started this very week as Executive Chef. There is lots of opportunity here, with Shangri-La, he says, his Australian accent barely perceptible. 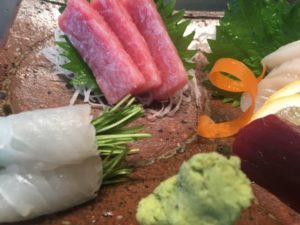 Of course this hotel has a Horizon Club, up on the 56th floor, and it is not surprisingly rather grand, with heavy gold-framed portraits and lots of crystal chandeliers. The views down over the harbour to Tsim Sha Tsui – as above – are stunning, when there is no typhoon of course, and the tables by the window are taken first. But I managed to get there soon after its 6.30am opening to shoot the video, below, without inconveniencing any others, although one European male, whom I could well imagine hiking in lederhosen or thoroughly enjoying his seat at Oktoberfest, almost beat me to it – he made a beeline for cheese, plural, while I loved the fruit. 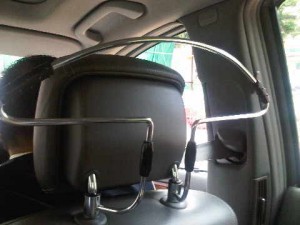 Hotel limos have coat racks behind the driver’s seat

And now that this luxury hotel has Adam Mathis in charge of the kitchens, it will be omelette time again, for he it was who perfected making omelettes with nonstick chopsticks. When I was lucky enough to coincide with him in Tokyo he even produced a specially-made video showing how to make an omelette that has a light but solid exterior case over runny-as-scrambled eggs inside. Just as the mound of mango sticky rice I – almost – collided with in Dubai was unique, so are Adam Mathis’ artistic efforts, especially when it comes to omelettes. As I have said so many times, it is little things that add up to a true luxury hotel experience. PS another special: the hotel’s limos have racks fixed to the back of the driver’s headrest so you can hang your coat, to prevent rumpling. NOW SEE MORE OF THE CLUB LOUNGE, BELOW