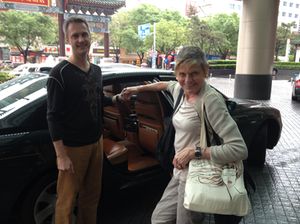 Like a Hermès bag, you can always rely on superb quality – it might be a Birkin, it might be a Kelly, it is still Hermès (the gal only discovered the other day that Hermès is backing a purely-Chinese brand, Shang Xia, which has its main boutique in the trendy 88 Xintiandi hotel in Shanghai, but that is another story).  Anyway, think of luxury hotels and the mind could switch to, say, Peninsula.  After leaving The Peninsula Shanghai and being farewelled by Ricci, a five-hour train ride brings Girlahead to Beijing South Station.  There, standing on the exact spot on the platform where my carriage stops, is a young man with my name on a card. Under an hour later, standing outside the main door of The Peninsula Beijing, is Joseph Sampermans.  He is in off-duty gear and his trousers exactly match the caramel of the car’s interior.  Style. 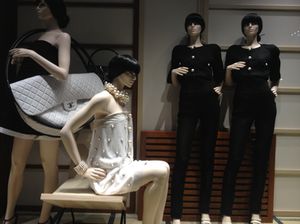 Actually I am now in the sanctuary of style, also known as the collection of 50 top-level boutiques that happens to have 525 bedrooms above it.  Look at the main entrance of the hotel, from Goldfish Lane (which becomes Donganmen Street), and to the right of the entrance is a Chanel store rising up through two floors, designed by that black-leather guy, Peter Marino. Look to the left of the hotel entrance and right now it is billboard.  When that hoarding is taken down later this year you will see a Louis Vuitton store. It too will rise up through two floors.  It also is designed by Peter Marino.  Let the battle of the brands commence. 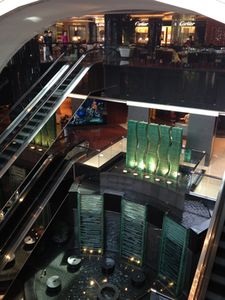 From the lobby, look at several floors of retail

Go into the hotel lobby and you are faced with acres of marble, and stunning shops around.  There are 30 shiny white marble steps to take you to the next floor gallery, where you find the spa, gym and pool.  There are also, from the lobby, steps to take you down to loads more shops, including Tom Ford’s only girls’ store in China. Wherever you look there are brands, 50 of them in all. Australian Louise Napier heads retail here, and back in the Shanghai store, and she must be extremely happy with her choice of labels, though, honestly, you do not see hordes of shoppers, just one or two, but when they shop they shop.  Sometimes girls shop together, sometimes a man and woman shop, sometimes a lone man shops for a woman.  It helps that the shop assistants are drop-dead gorgeous, as stylish as the mannequins. 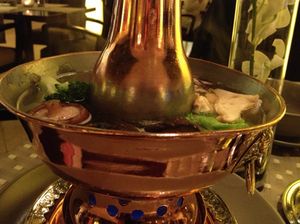 Down on the lower level is Jing, where I have breakfasted but never dined.  What a treat I have in store!  This is one of the world’s best international buffets, with everything from sushi to steak the way you like and, I am sure, fish and chips (did not see that but I was tempted by the pastas).  I went for a Chinese hot pot.  Choose your protein (thinnest wagyu), choose your veggies (big mushrooms, broccoli).  Choose a spicy addition or sauce, and your thus-flavoured water is brought to the table, heated in an elaborate copper burner. Just as in Switzerland you cook your fondue, here you cook your bits and pieces and, boy, is it delicious. 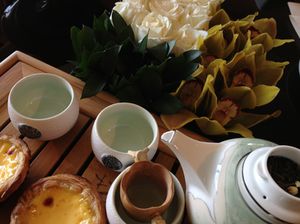 Back up in corner suite 800 (the ‘hundreds’ are my favourite as they look down on a neighbouring school yard where students do PT exercises before class), I make tea from a set that comes with an exquisite fine-mesh and bamboo strainer, and think what to do in the morning.  I could take an architectural tour as part of Peninsula’s Academy offerings, or learn Qigong martial arts.  I opt instead to borrow one of the hotel’s bicycles for a sunrise tour around the Forbidden City. Head left out of the hotel, keep going for 15 minutes and you come to it.  Cycle around the outside, avoiding early-morning fishermen, come back.  Whew, after that I try a Chinese massage. Twenty minutes of exact finger-pushing at some of the eight muscles ‘gates’ in the body are far more effective than the hours of ‘pampering’ and ‘spa journeys’ that so many offer these days. 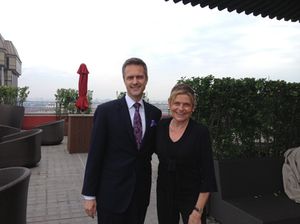 And after that I am in for a real treat.  Joseph Sampermans has cleverly turned one of the rooftops at the end of the C-shaped building into a summertime bar called Yun terrace. It is drinks, and satay-type food, and right from the start, on June 14th, 2013, it became a sensation. That night, the opening party included 30 traditional media and 20 bloggers and resulted in over 50,000 hits on the hotel’s Weibo site. Guests loved the live jazz band and wonderful female Brazilian DJ as they nibbled on tofu rolls with enoki and black truffle, and drank Peninsula champagne or, out of steel mugs, Guilin Breeze (Manuka vodka, white rum, peach and honey).  They even went away with their own steel mugs and pre-mixed drinks.