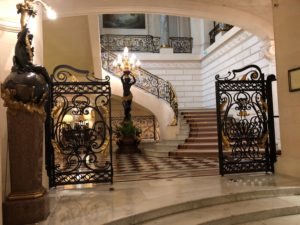 What an blessing it was, for posterity and for the continuing appeal of Paris as a top tourism destination for the luxury traveller, that the great and good of the past built such magnificent private residences – each one, as it seems to us today, bigger and better than its neighbours. In 1896 Prince Roland Bonaparte, built just such a grand palace, on avenue d’Iéna. He probably needed to show his status: grandson of Napoleon I’s brother, Lucien Bonaparte, he was married to the daughter of the founder of Monaco’s Société des Bains de Mer SBM, François Blanc. This is the building that opened in 2010 as the luxury Shangri-La Hotel, Paris. 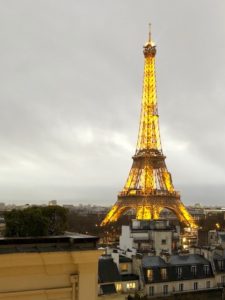 Its public rooms are glorious and the main staircase must have seen many elegant important people processing up and down in past years. Today, with updated architecture by Richard Martinet and interiors by Pierre-Yves Rochon, 60% of the 91 bedrooms have views of the Eiffel Tower, only a few hundred yards away. Hotel GM Guy Bertaud, the Parisien who, after years working abroad is now back home, says you can lie on some beds and look straight out at the Paris ‘logo’, which is illuminated every night as shown in the image here, which Bertaud did in fact take when he was overnighting in the hotel (which all good GMs should do from time to time). 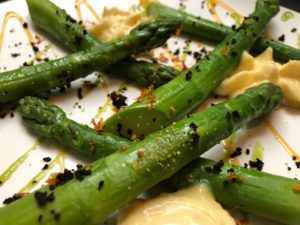 We wanted a quick lunch, which this hotel does splendidly in its more-casual La Bauhinia, called after the orchid on the national flag of Hong Kong, headquarters of the Shangri-La group. The menu is by Christophe Moret, who also oversees the more-elaborate L’Abeille, which has two Michelin stars – here, his lunch menu includes such dishes as green asparagus from Haute Provence, with three balls of Maltaise condiment, which I find out later is hollandaise with blood orange juice, and it is totally delicious. I go on to a really healthy dish of seabass, enormous fish on a big plate of spinach, with tiny cubes of tomato flesh and slivers of mushroom, and feel fit to face the afternoon. 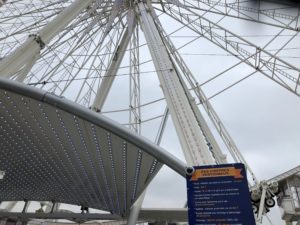 Interestingly, quite near this luxury hotel, as I walked briskly along … a young man overtook me, and suddenly bent down and then showed me a thick-band gold ring he said he had found on the ground. I had not seen it, why not? I was musing over that lovely lunch… He showed me the 18ct marking. I said I would take it to the police, and took it. Give me money, he said, I am from Yugoslavia. I said I had no money, and he took the ring back saying he would take it to the police. I was later told this is a regular ploy, to get familiar with an intended victim and quickly decide whether to pick a pocket, snatch a handbag or jewels or whatever. Perhaps he decided this young lady was not such an easy target as he disappeared quickly and I, with all property intact, walked even quicker. I had been thinking how beautifully the asparagus had been laid out, and then I came to the Paris Ferris wheel, the Roue de Paris, 200 ft high in Place de la Concorde, another geometric pattern for the memory.