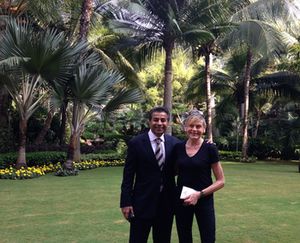 From one luxury Leela hotel to another.  Welcome to my palace, said Andrew Hendrian, when the gal arrived in Bengaluru, commonly still called Bangalore.  Actually it will not be his palace much longer.  After five years he is moving on from The Leela Palace Bangalore and his equally-charming successor, Kunal Chauhan, is not only already there, with his new business cards, but within the first two days he lost his voice, obviously from talking to as many as possible of the 1,100 employees who look after the 350-room hotel. 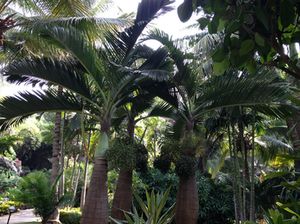 Eighteen of the team are full-time gardeners and they do a tremendous job.  The hotel is wrapped around six acres of lush gardens, with 49 different types of palm trees (some say there are 2,600 different palms in all; how can anyone count?).  My favourite is the Champagne Palm, Hyophorbe lagenicaulis, named because of the bulbous shape of its trunk, resembling a bottle of, say, Dom Pérignon – it can grow up to about 22 feet when mature. There are also lots of King Palms, Archontophoenix alexandrae, also known as Alexander or even Alexandra Palm – these were native to Queensland. 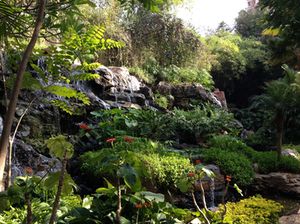 Once upon a time, long ago, this was a timber-growing area and there used to be a pulp factory on this site.  Then the clever Nair family bought the land, metaphorically sat on it for a while and asked designer Don Siembieda to look at various Mysore palaces. The result is a six-floor pink sandstone building with soft green domes atop, the whole based on the Royal Palace of Mysore, designed in 1912 by Henry Irwin in Indo-Saracenic style (known as the Amba Vilas Palace and official residence of the royal Wodeyars dynasty, that palace today is second most visited tourist attraction in India after the Taj Mahal in Agra, with over 2.7 million visitors a year). 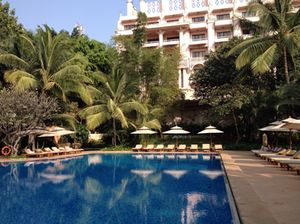 Surely the original cannot be as opulent as Leela Palace Bangalore, with its outdoor pool, and bijou outdoor gym to one side. Swim your laps, and look at the acres of lush garden around, and look up at the hotel, where every room has a balcony.  Best of all rooms is 315, the 2,500 sq ft Royal Suite, with its enormous balcony, big enough for a cocktail for 20. It is a lovely suite, with its honey-marble floor and matching rugs, and honey-textured furnishings. Do make sure, whatever room you choose, that it is one that allows access to the eighth floor Royal Club, open from 6 a.m. Actually because of the appalling Bangalore traffic it is a good idea to stay put, in the hotel.  Enjoy those gardens, the gym and spa, the Royal Club, and the restaurants. 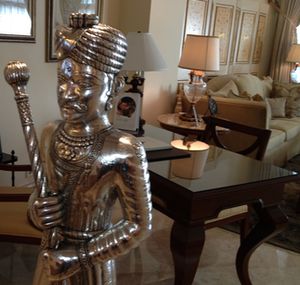 All the restaurants flow to outside terraces so you can eat in, or out; Bangalore’s temperature is so ideal year-round that you can breakfast, lunch or dine, any day outside, if you want.  Even the Library Bar, a cosy gentleman’s-club ambience, has an outdoor extension, which cigar smokers appreciate.  I loved my meals in the new all-day, all-cuisine Citrus, which has a smashing seafood buffet on Wednesdays.  By April 2014, the latest Le Cirque Signature by Sirio Maccioni and his family opens up on the eighth floor – another reason for me to return.  One tip, however, do not choose the Maharaja Suite: it has bullet-proof glass which means you cannot go out on its balconies. 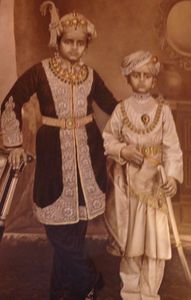 UK Prime Minister D. Cameron stayed in the Maharaja Suite when he visited Bangalore in 2010 and he effusively praised his butler Leo – as the UK media said afterwards, obviously the Eton-educated David Cameron can tell a good butler when he sees one. Did the globe-trotting Prince Andrew also stay in the suite when he was in town?  Andrew Hendrian shows me a photo of the two Andies. I told him the one on the right was much better looking. It is time to go, but I have a last look at some of the artworks that the Nair family have put on the walls of this gorgeous palace, this sumptuous luxury hotel.  I particularly like this rendering of two Wodevars boys, in earlier times: the decorations on their turbans are real jewels, stuck on.