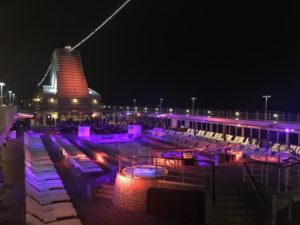 Yes, the gal is at sea again – there is nothing better than sailing away over Christmas, and the lovely thing about Regent Seven Seas, part of NCL, is that Christmas is tasteful. There are a couple of understated Christmas trees and a few strands of tinsel but none of that ghastly Jingle Bells music. Seven Seas Mariner is sheer luxury, for those who want to escape sock-it-to-you commercialism. Of course there are standard features, common to all cruising. Before the ship even leaves the Port of Miami there is compulsory safety drill, as above, and, once sailing away, those who want to start downing the Jacquart (the glasses in some restaurants are Riedel but sensibly poolside glasses are plastic, though you can hardly tell). 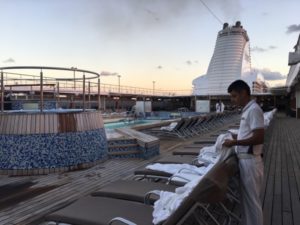 This ship, 709 feet by 93 feet with draft of 21 feet, is absolutely gorgeous, 15 years old but meticulously maintained. She carries 700 passengers on eight guest decks. Up on the 12th deck there is putting, and two golf nets, and a full-sized tennis court and quoits, and the gym is enormous, with a studio for spinning-for-ten and an ace fitness instructor, Slavi, one of three Serbs among the 445-strong crew. I quickly make myself at home. My daily routine starts with pre-dawn trekking round and round the jogging circuit, which is fine when the weather allows but is really ghastly when it rains, but who cares? 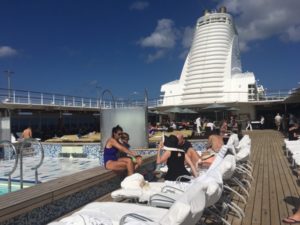 .. and as the morning progresses

By midday the entire deck area, around the pool and three jacuzzis, hums with activity. Seven Seas is so inclusive that most tours are all-in, too (as someone said, yes, you pay up front but, once onboard, you never need to spend a cent, unless you head for the boutique, the casino or the spa).  You also seem to be able to eat and drink anything, and wherever and whenever you like, but more of that later. What does this ship NOT have, you might ask? Well, it does not do formal nights, although some men do bring dinner jackets, and actually most women dress quite stylishly every evening. 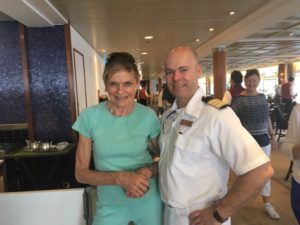 You generally do not see the officers eating in the buffet restaurant at breakfast or lunch, but they do host tables, in an informal and low-key way, at dinner. The first night onboard I was lucky enough to have a table at Prime 7, the steakhouse that is so good it would give any luxury hotel’s Wolfgang Puck CUT or other carnivore theatre a run for their money, and, honestly, Prime 7’s truffle fries are as world-pinnacle as the onion rings at Le Grand InterContinental in Bordeaux, especially when paired with the Meritage Mondavi 2015 that the sommelier suggested that night. When I told the ship’s GM, Anatoli Makaev, how great the food is he just beamed.