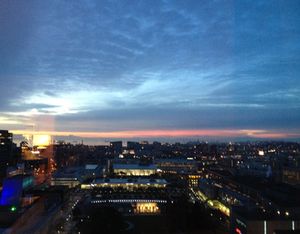 How to start the day at a luxury hotel that one knows so well? Four Seasons San Francisco provides today’s example.  Wake up and look out of the window of suite 1703, west along Market Street to 4th Street and beyond. Market Street has an epidemic of techies, by the way: Twitter is moving its sales force here, which is good for business, but then Apple and Google and a myriad of start-ups are here in town.  San Francisco is THE place to be, it seems.  A lot of these techies are already working out as soon as the hotel’s integral gym – the two floors of Sports Club/LA that even give you four Stairmasters – soon after the facility opens at five. Would they have time for some of the 52 classes the club offers each week (60-75 minutes a time, from 7am to 7pm)?. 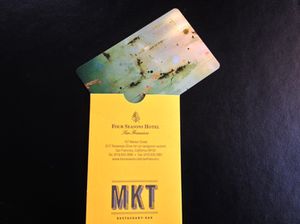 Four Seasons has brought itself up to date.  What do techies and other Top People want from their hotels of choice these days?  Decent desk chairs and lots of sockets. Yes to both. Good breakfast, whether in the room, or in the restaurant, solo or at an early morning meeting.  Tick those, too.  Room service, a simple A3-sized card, offers Farm to Room Service, plus Food on the Fly (to go). Downstairs, off the fifth floor lobby area, the new all-purpose food-entertainment zone, MKT (short for MarKeT) Restaurant-Bar, designed by Avroko, is well publicised, on the keycard holder – see the photo – and in elevators, and on a placard in the fifth floor lobby.  Go there for breakfast, and you pass a log-look fire, the most popular lounging area around. 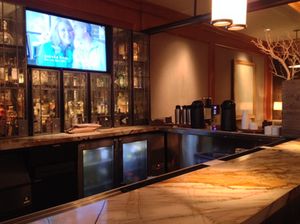 From the lobby progress via a sports bar…

You go through the bar area, obviously not working at this hour though the television brings you up to date on today’s news. There is an area with high-up, communal seating, and another, in an end room, that can become a private dining room, or small wedding venue.  Sit by any of the windows and you look out at the hubbub of Market Street, and its busy activities – because of the three hour time difference between here and New York, many San Francisco workaholics start their days early (is that another reason for so many people in the gym at that early hour?). 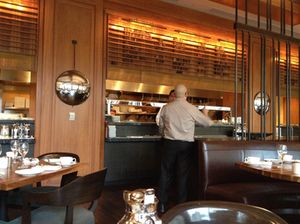 ..to restaurant, with open kitchen

Every restaurant in today’s world should have an open kitchen, so you know there is a real chef working there rather than a robot opening meals-ready-to-eat.  I have an excellent cup of Peet’s coffee, the brand that seems to have surpassed Starbuck’s, at least in the Bay area – it was founded here, in 1966, by one Alfred Peet and is now privately owned by the German Joh. A. Benckiser.  Yes, for a good breakfast you need quick, and good, coffee.  Tick both requirements. 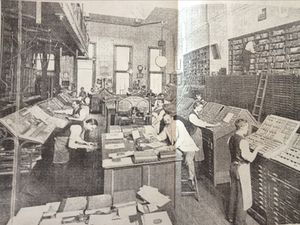 The menu is charming.  It is an A3-sized grey sheet, folded over as if a newspaper, and an illustration even shows an old printing press.  Having given my order – a MKT favourite is lemon ricotta griddle cakes – I read the menu’s headline news. What happened this month, in the past?  In 1929 it was the St Valentine’s Day Massacre, in Chicago.  Seven mob associates of the North Side Irish gang led by Bugs Moran were gunned down by Al Capone’s South Side Italian gang, probably assisted by the Egan’s Rats gang.  Less gruesomely, this month in 1935 saw the launch of Monopoly. 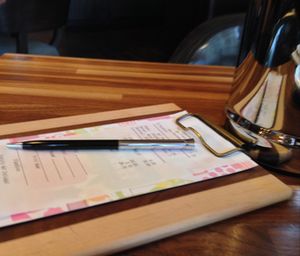 Your check comes, charmingly, on a designer-wood clipboard