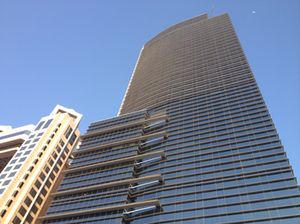 Look up, to the Conrad

In some parts of the world the successful own racehorses, or yachts, or both. In the Gulf, especially in the UAE, it is prestigious to own a luxury hotel or two, as well. And of course, just like a horse, you want it to win, which is certainly what has happened with the spiffing new Conrad Dubai. At the MENA (Middle East North Africa) awards, judged by hospitality consultants, it won 2014’s best new regional hotel, best hotel for meetings, and best corporate hotel. What a tally for an eight month old, says the gal. 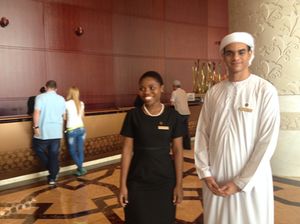 Welcome, in the lobby

First, its location, at the south side of Sheikh Zayed Road exactly by the entrance to the air-conditioned bridge over that pedestrian-free highway, straight to the metro and on, direct to the home of ATM (Arabian Travel Market) and many other important shows – and the World Trade Centre. Then its facilities. You might be picked up by a black Maserati, WiFi enabled, of course. It glides up to the hotel doorway and you enter a two-floor area of lobby space, dominated by a 30-by-30 (foot) backlit panel of orange marbles. There is lots of orange, and brown, around, plus the black of customer service women’s chic skirt suits, with pearls. This hotel is a fashion statement. 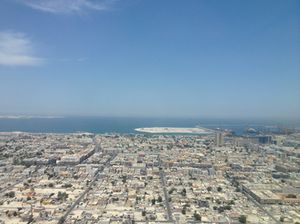 View south, to the Gulf

The hotel soars up to the 40th floor – best rooms have access to the lounge on the 24th floor. From 3913, I could look across to Sheikh Mohammed’s palace, and south, past older parts of town to the waters of the Arabian Gulf. I look around me, inside, at a space that said success, sand coloured carpet, sand coloured walls and upholstery, a strong-statement, back-lit fretwork bedhead. I was reading a bit of masculinity in all this, balanced by Aromatherapy Associates toiletries that remain a big feminine favourite. 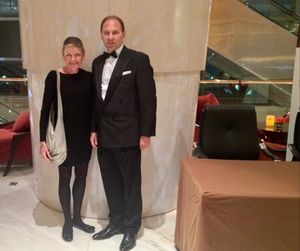 Andreas Jersabeck, the Austrian boss of all this, knows that this is a signature hotel to run. His career has included other ultra-important properties – he opened the Trafalgar, in London, that Hilton in those days hoped would be the first of a new lifestyle brand. But despite its location, on Trafalgar Square, and despite its rooftop bar (summer only) and its enthusiastic GM, it never took off, and, come to think of it, Hilton still has to get into the true ‘lifestyle’ sector. 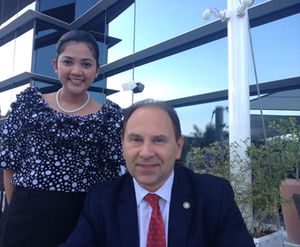 We had breakfast the morning after the MENA awards, on the gorgeous terrace of the Ballaro restaurant, on the hotel’s sixth floor. This is where you also find the yoga terrace, and the really good Technogym. I marveled yet again at how chic everyone looks here. You, dear reader, already know the importance I stress on breakfast servers’ gear, and here the white polka dots on black frilly blouses make you want to do a Latin cha-cha-cha immediately – their male colleagues wear white shirts and aprons, and black trousers, all with palest grey stripes. 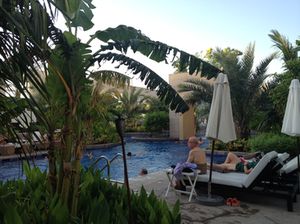 The sixth floor is also home to Purobeach. Yes, this luxury hotel has branded its pool area. About two acres of terrace have trees and grass, and dozens and dozens of loungers set in little private areas. The curvilinear pool has a pool bar, covered over, at one end that apparently erupts into a full-fledged nightclub as the light goes down. There is no sand, no proper beach, but the association with Ibiza and Marbella is more than enough to give those successful meetings and corporate guys a breath of fresh air after all their business.