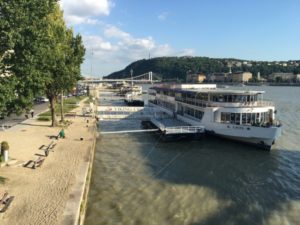 Yes, historical buildings abound in beautiful Budapest, and some of them were turned long ago into luxury hotels. In 1896 a building on Erzsébet was opened by Frigyes Glück as the Grand Hotel – see an early rendering of it, above. Today, as the luxury Corinthia Hotel Budapest, it is, summer-long, pre- and post-cruise resting place for the thousands of leisure travellers who come in to the city on Danube river cruises. Their cabins are in some case almost up to the level of sea cruises, although supporting infrastructure is obviously less because of confined space in a boat that has to get through narrow canals and locks. So, surmises the gal, these travellers must love arriving at a grand hotel. 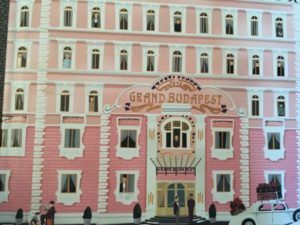 And although the 2014 Wes Anderson and Ralph Fiennes movie ‘Grand Budapest Hotel’ was not based on the Corinthia, there are similarities, through name and exterior – see the movie trailer, below. I loved having a copy of the book among the seriously eclectic collection of art books waiting in front-facing suite 3204 – I could also have spent my time reading up on Dior or Erté, or merely immersed myself in Vogue Living. This very interesting suite is one of four of the 14 Deluxe Suites recently redone by Martin Goddard of Goddard Littlefair, London. He has cleverly taken a very-tall single-room space, and divided it into two by what seems like open-backed bookshelves either side of ceiling-high double doors. 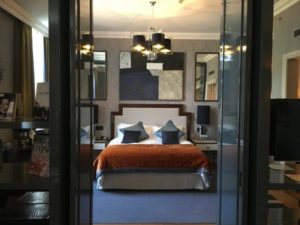 Looking from sitting room to bedroom

In fact, however, the bookshelves are backed by mirrors, which makes both sides, bedroom and living room, seem much larger. All the windows in both rooms open, so I was able to get lots of fresh air. 3204 has another big advantage in that it is only ten yards from the main elevator, which saves time – another elevator takes you down to the ground floor gym, and spa, but the weather was so blissful I used my workout time hiking the adjacent streets, marvelling at such wedding-cake buildings as the Hungarian State Opera House, finished in 1884 by architect Miklós Ybi (what would he have said had he known Billy Elliot is playing here later this month?). There are so many restaurants in the area around the hotel that many dine out but no-one should miss breakfast, which is magnificent. 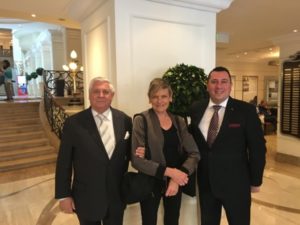 Main breakfast is in an inner room with an upper-lit bright sunflower-coloured stained glass ceiling – everything looked good (loved the berry smoothie). The clever guest buys into the club lounge, which is a conversion of a former restaurant on the mezzanine gallery looking both down into the hotel’s lobby and also into Erzsébet – breakfast here, in comparatively more peace, though it will be absolutely full during the Grand Prix on Sunday July 24th, 2016 (the race track is only 35 minutes’ drive away). I had the joy of meeting at the hotel, incidentally, not only its Maltese GM, Jean Mifsud, but also the doyen of the 215 employees, Senior Manager Tibor Meskál, who proudly showed me, in a collage of early images of hotel life, a photo of him as a young server in 1961. He later did a spell in London, at another luxury hotel, The Dorchester, but he came home, he said, his bright blue eyes twinkling.  NOW, IF YOU HAVE TIME, WATCH THE MOVIE TRAILER, BELOW