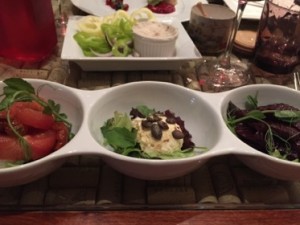 A trio of starters (with fat-and-crudités behind)

Until Friday (July 31st, 2015), talking Hungarian food with Corinthia Budapest’s GM would have implied chatting with Thomas Fisher. Yes, says the gal, now it is time to talk Hungarian cuisine. Every one of the people chatted with on this trip to Budapest talked about gastronomy as one of the highlights not only of the city’s luxury hotels but also its culture in general. Walk anywhere in the centre of Pest and there are countless outdoor cafés summer long. It is food food and more food, and, as in Austria, cakes and coffee. At Corinthia Hotel Budapest, one of its restaurants, opening right to Erzsébet street, is leased to the Bock Bisztró company. Sit at any of the tables, glass-topped with old wine corks underneath, and look up at the blackboard showing what dishes are special today. There is also, for non-Magyar speakers, a multi-language printed menu. 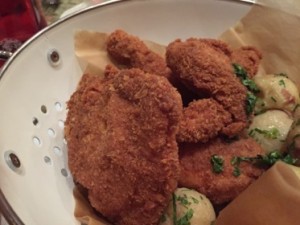 It could have been difficult to get away from brown-brown and more brown. We were brought a pot of pork fat (or was it goose?) which came with raw chilis as scoops. I passed on that, and enjoyed the tasting of 2013-vintage Hungarian wines, carefully explained, and carefully poured, by a waiter in a full-height apron. First came Bott Frigyes Kadarka Garam Mente, and then Villány Kékfrankos Bock József. For my first course I had small portions of three listed starters, tomato salad, soft Vaszoly cheese, and beetroot salad. No brown so far… how long can I keep this up? Around us locals, often pairs of chic young women enjoying an evening out, came in right up to about 10.30 p.m.   Things do not start early here (hotels’ gyms – no, that is gyms NOT GMs – seem to sleep until about 6.30 a.m.). 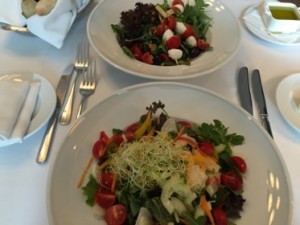 Ha, I have brown, or at least golden brown, escaping goulash or a ragout I choose half a deep-fried battered free range chicken. It comes in four bits, each deliciously battered. These, with small whole sautéed parsley potatoes, were laid in greaseproof paper in a tin bucket. I had a small side salad of marinated cucumber, as suggested by the waiter, who also thoughtfully brought a small finger bowl, with lemon in the water. I could then have gone on to a slice of dark brown Hungarian chocolate cake, Rigo Jancsi, with cocoa-whipped cream filling. However, as my grandmother used to say, enough is as good as a feast and I had dined magnificently. 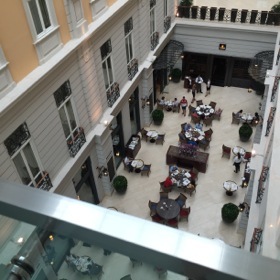 Looking down into the breakfast atrium

But in case you think that all the food at the 415-room Corinthia Hotel Budapest is traditional, let me say quickly that there are alternatives. There is an Asian restaurant, Rickshaw, and the Club lounge, on the mezzanine gallery looking down into the marvellous marbled lobby of the building first constructed in 1896, has lots of fruit at breakfast, and crudités and dips among its generous lunchtime offerings. I actually lunched in my room as I had an article to finish. Look at the healthy salads that were listed, as such, on the room service menu. It was tempting to stay in room 3202, on the third floor of arm two, much longer anyway – the books around included William Claxton’s Steve McQueen, Terence Pitts’ stunning Edward Weston photograph compilation, and tomes on Art Nouveau and Pop Art. 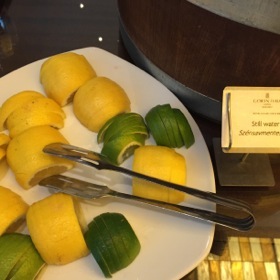 I feel I am eating à la Elle McPherson, who is busily promoting her Super Elixir range of nutricosmetics, things you eat to make you even more beautiful as well as healthier. I had also eaten really healthily at the truly memorably breakfast buffet. Look down at the six-floor atrium from upper-floor corridors, and see guests down below – they go inside, to one of the interior rooms, for the big buffet, with lots of chefs. I picked up Good Morning satellite news sheets, from UK and US and also one from Russia, good for a Putin update. Bad luck gal, it was in Russian. I reverted to an old Economist instead. Around me most, anyway, were checking their smartphones, mostly iPhones. Hungarians really do not stay in Budapest hotels – I guess out of towners have friends or relatives to put them up when they need to be in the capital: those that were around me were checking Facebook or Instagram, the most popular media. 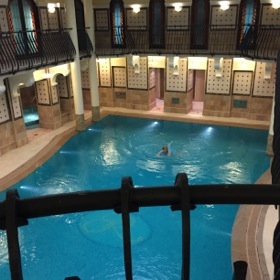 And then I headed for the pool that is one of the main features of this luxury hotel, which Corinthia converted  in 2002 (it was Hotel Royal before). Spa rooms lead off the upper gallery around the pool. Brigitta, with hair remarkably like mine, did a sensational treatment and as I finished someone brought me a new key as mine would invalidate at noon. That is service.  That is one reason why Eric Idle and Arnold Schwarzenegger, both of whose names are on the roll of honour in the main lobby, have recently stayed here.  I left Corinthia Budapest as GM Thomas Fischer started packing – today, this very day (Monday August 3rd, 2015) this hotel has a new GM, Jean-Pierre Mifsud.  Thomas Fischer is in London, but that will be another story.