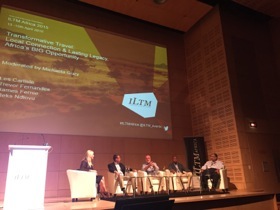 Luxury hotels and safari camps from most of the 47 countries in Sub-Saharan Africa gathered in Cape Town April 13-15, 2015, for the third, and largest, annual ILTM Africa, produced and overseen as always, says the gal, by the indefatigable Alison Gilmore (although she could not have done it without her three right hands, Lucy, Marco and Natalie. It was Natalie who stage-managed the opening Forum, which had two fascinating solo presentations, a geophysical overview by Anita Mendiratta and an emotional explanation by former banker Kevin Chaplin, now heading the Amy Biehl Foundation (after her death, Amy’s parents were brought to reconciliation by Archbishop Desmond Tutu). 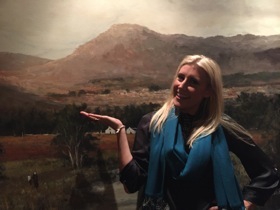 Then Michaela Guzy hosted a panel of tour guides and conservationists discussing transformative, more generally known as responsible, travel. Michaela dressed, as always, to thrill rather than kill – she has discovered Kenyan designer Anna Trzebinski and onstage she wore a calf-length coat of, well, feathers. I think they were black or navy blue but I do know they were complemented by leopard skin-look stilettos. At other times during ILTM she touched up shorts or whatever with a long-long floating Trzebinski scarf with masses of feathers at each end that kept on getting caught under chair legs. Goodness knows how Michaela will cope with all this gear when she goes on into the bush, because she is headed once again for AfrikaBurn, which sounds as if Glastonbury is a five-star hotel by comparison. 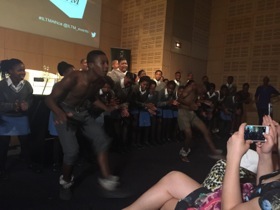 School kids dance at the Forum…

The finale to the Forum was truly memorable. About 50 school kids, I guess early teens, came on down the auditorium steps singing as they came. Their chorus master was like a length of thin wire made of bendy rubber – you could hear him tweezing the right notes out of them. They sang, they danced they sang again. They were having a whale of a time and then someone who looked like their headmistress-mama, with a big turban, came and joined in, and if Natalie, in charge of it all, had not turned up the auditorium lights we would have been there all day, perhaps even joining in with the festivities. But then it was hard work. Computer-fixed speed-dating, 20 minutes each session, a top international travel buyer getting to know a glorious hotel or camp or private jet company. 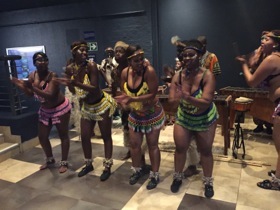 .. and adults let off steam at the Aquarium

But as we know all work and no play is no good and every night ILTM arranges something special. The first night was at the Aquarium on V&A Waterfront, and there were speeches in front of gigantic fish and turtles swimming just behind the dignitaries. There was more dancing, this time from grown-up young ladies, and it was, well, lots of fun and doubtless lots of the luxury hoteliers there wanted to join them.