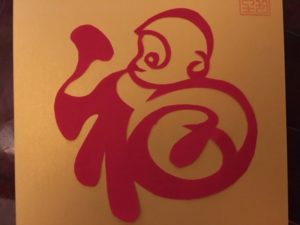 Paper cut-out for Year of the Monkey

Ritz-Carlton Guangzhou is a gorgeous and well-established luxury hotel – for eight years, it has been the magnet for locals, and international travellers wanting a quality base here in this growing city (formerly known as Canton, and now among China’s largest, with over 15 million people). Arrive here, at the 351-room hotel, and, says the gal, you know immediately where you are, and what time of year it is. Welcome gifts always include a display of current seasonal fruit, which happens at the moment to be mango. See, above, for the imaginative display waiting in room 3708, the Carlton Suite. Also waiting was a silhouette paper cut out. Come and see the artist at work. He is in the hotel lobby every afternoon from five o’clock, for an hour. 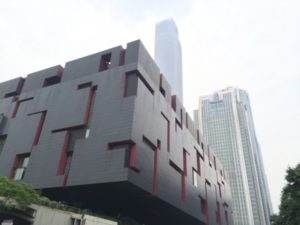 Down I accordingly headed, and saw how using only a pair of scissors, with surprisingly long blades, he cut out the monkey shape, a reminder that this is the Year of the Monkey (see the video below). This is truly a lovely memento, and it does not take up any space in my Porsche Rimowa, always a vital point. Back up in 3708 I looked down at the view, which includes Guangzhou Museum, right next door, and then took a walk to Pearl River, ten minutes away. This was a little bit of a challenge as traffic is likely to swerve around corners, and straight at you, even when you supposedly have right of way, or think you do. To add to the hazards, the majority of other pedestrians, including those pulling big boxes and the like, are permanently on their devices. I am convinced every China person will have a ricked neck within a couple of years. 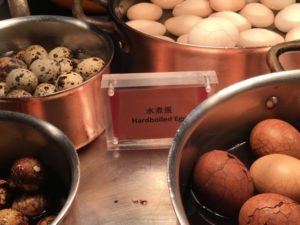 Buy a Club room at the Ritz-Carlton and you not only have access to the 33rd-floor lounge, which looks down at the Pearl River and, also, the 58,000-person Tianhe Stadium, built on the site of the former Tianhe airport (this is home of Guangzhou Evergrande Taobao Football Club, in which Alibaba has a 40% stake, and current manager is Brazilian Luiz Felipe Scolari). The lounge of course has Ritz-Carlton’s usual superlative food (and drink) but you get discounts on spa and transport, and free arrival-departure transport, and really lovely staff. After my club breakfast – where I really liked the service, on Dr Stéphane china (decorated with little purple leaves that matched the orchid in a small vase) – I had a look at the general breakfast in the appropriately-named Foods. There was a good display of different congees, and china-stoppered individual bottles of flavoured iced teas. There was also, imaginatively, a selection of different eggs, chicken and quail, soft, hard-boiled or cooked in tea. 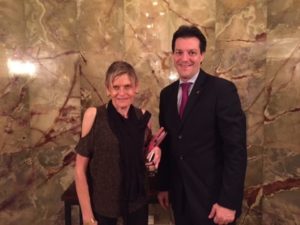 It is little things that differentiate one luxury hotel from another. Here are another couple of examples, at Ritz-Carlton Guangzhou. At dinner, at Limoni, chef Andrea Zamboni makes his own burrata – and gosh, it was good. Manager Nicholas Wong is a real wine buff – this month, he picked up a China Best Wine award. This evening, he chose an outstanding local wine, a Pretty Pony 2013 from Kanaan Winery, Ningxia Helen Mountain, made by Wang Fang, obviously a characterful lady as her nickname is Crazy Fang. And then, this morning, five minutes after my wake-up call, my choice of coffee (a big pot of flavourful brew) arrived, with the hotel’s compliments. What a lovely touch, thank you Matthias Vogt. SEE THE MONKEY VIDEO BELOW.