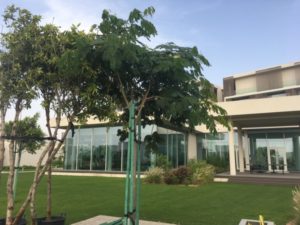 From one established water-set luxury resort in UAE to another… the gal was one of the first to experience the stunning Oberoi Beach Resort Al Zorah, Ajman, which opened April 5th, 2017. This is a pioneer, half a mile from a main road down a lonely track bordered merely by sand and fledgling palms – but give it time and this will be anchor of the Al Zorah freeport being developed by the Government of the Emirate of Ajman and Lebanon’s Solidere, masterminded by the Hariri family. The 113-room futuristic resort is designed, inside and out, by Piero Lissoni, who, as everyone knows from his brilliant conversion of The Conservatorium in Amsterdam, loves glass. Here he had no ancient building to transform. He started from scratch, with the result is that rows of glass, white concrete and metal buildings gently cascade down to pristine sand. 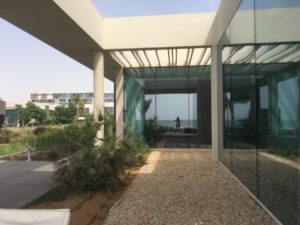 A reflection in villa 608

All the rooms are suites, minimum size 1,200 sq ft, and all have really sizeable pools, about 40 by eight feet, and four feet deep. I was in 608, one of the 2,700 sq ft suites right down on the beach. Out on my terrace, I could look along the beach through a pair of decorative outside loungers, shown at the top of this story. Looking back at my home I could see myself reflected in the glass. Inside, Lissoni has specialised in all-wall glass, one-way fortunately as some walls merely have net-like drapes. 608 has one living room, with a wall of black-decorated white tiles, and an eco-system inset fire – see the video below for a tour. The two bedrooms each have enormous walk-in closets as well as bathrooms with egg-shaped tubs and indoor and outdoor showers. 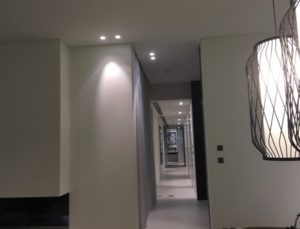 Unusually, the backbone of the entire space is one long corridor leading back from the living room, with all other spaces leading off it, to the left. The Italian minimalism has been softened by elegant displays of lilies and extremely well-chosen hardbacks, say on Porsche Design. I also do a potted PhD on sneakers, thanks to two tomes. 1000 Sneakers: A Guide to the World’s Greatest Kicks, from Sport to Street, by French GQ Sports Editor Mathieu Le Maux, who tells me that the most expensive pair of sneakers ever was the pair of Nike Air Yeezy 2 Red October, which made $16,394,000 on eBay on February 16th, 2014 – coming in a slow second are Nike Air Jordan XII Flu Games, on general sale at $104,000. By contrast, from Out of the Box: the Rise of Sneaker Culture, Elizabeth Semmelhack, with the American Federation of Arts, Bata Shoe Museum, and Skira Rizzoli, I learned about sneaker-care, and that the next global sneaker convention is Sneakerness, in Zurich on May 6-7 2017. 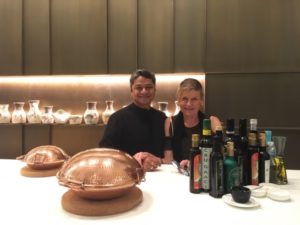 This luxury hotel has a 24/7 gym, not surprisingly glass-sided, and outstanding food. Chef Vishal Khulbe, who moved here from Oberoi Dubai, reminded me of the camel milk icecream he made for me there. Here, he composed a crudo dish, with mango bits, and from the menu, I had a juicy slab of grilled local tuna, which went beautifully with a side of ultra-crispy calamari rings. I was dining with two of Oberoi’s top resort operators, John Halpin, based at The Oberoi, Bali, and, from The Oberoi, Mauritius, Dhiren Periera. We had an early dinner and in the morning I was able to have a really good swim before breakfast arrived, on the dot at 5.30 a.m. And then it was on to the next place.