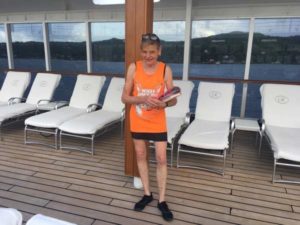 Another day at sea on that gorgeous floating luxury hotel, Seven Seas Mariner – and despite the Key West T-shirt, to the left, the ship is at anchor off Roatán Island, Honduras. This is the Ibiza of Central America, an island 48 miles long by five miles wide, 30 miles off the Honduran mainland. You can fly here nonstop from Atlanta, Houston, Miami and Newark, but from the luxury hotel point of view, forget it: Nikki Beach, originally planned for 2008, does not seem to have opened. 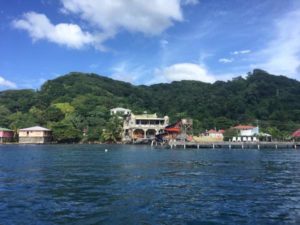 TripAdvisor‘s top hotel, of 43 on the whole island, is Tranquilseas Eco Lodge and Dive Center. The worrying thing to me, actually, is that this ‘top hotel’ on an island with 80,000 inhabitants had no reviews between April 24th, 2016 (‘ I cannot say enough about the warm and attentive staff’) and December 20th, 2016 (‘The food was very good and the staff (who all speak fluent English) were probably the best part of our stay’). Does this mean that the diving community, which seems to constitute a big part of Roatán tourism, does not know how to write? 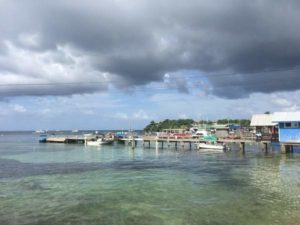 The ship only had a few hours there. We moored off Mahogany Bay, on the sleepy east coast, and took small buses over the wooded, hilly spine of the island to West Bay, definitely the more sleazy area, with side-by-side shacks offering endless coffees, local chocolate and knickknacks. We were deposited at one of the cafés in two-floor wood buildings extending out into the water, and we had a fabulous ten-minute demonstration of punta dancing, in which young teenagers roll both buttocks independently, round and round. 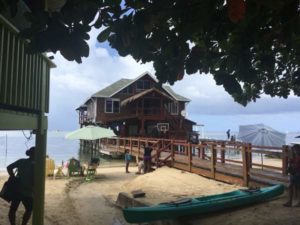 One of many entertainment shacks built out into the sea

This – as shown in the photo at the top of this story – must be amazingly good for female figures – our three dancers had waists you could put both hands around, and firm bottoms and, somewhat amazingly, very firm and well-developed breasts (if luxury hotels were to offer punta dancing in their fitness programmes they would get lots of take-up). After that came shopping, and a ride in a glass-bottomed boat, but some travellers just lay on the beach, perhaps having their long Caucasian hair braided with multi-coloured beads. WANT MORE DANCING? SEE THE VIDEO BELOW