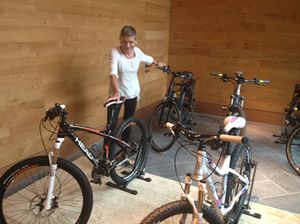 Switzerland’s newest luxury resort, The Chedi Andermatt, partners with Head, which is a good thing as this last season, its first, over 75 percent of people staying here rented skis. Since the hotel is attracting the private jet crowd, flying into the Pilatus-factory airfield at Buochs, 45 minutes’ drive away, renting equipment makes sense. In Summer, a sports butler transforms the ski-in ski-out room into a haven for his bicycles, which of course made the gal happy – she was also ecstatic that security opened the well equipped, well-carpetted Technogym (with Antonio Citterio equipment) early, before the standard seven o’clock opening. 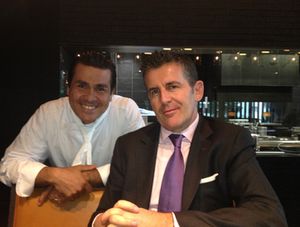 How else can you get to Andermatt? Take the scenic Glacier Express train, between St. Moritz and Zermatt, via Andermatt. Helicopter, or drive, from Geneva. From Zurich, it is 90 minutes’ drive south, which makes it a delightful lunch venue if you have not got time to stay over. Hansjörg Meier, currently in charge of the hotel, has an Iranian chef, Mansur Memarian, who honestly wows. He goes round The Restaurant, with its four separate glass-walled kitchens, talking to you, finding out what you would like. The main menu has a chef’s tasting offer, plus à la carte sections divided into Western, Indian and Asian. 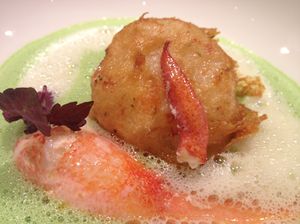 He might suggest a tempura scallop starter with a lobster escort. At lunch, I wanted merely fish on salad. He suggested local river trout, and the salad had more herbs than I knew the name of. The village butcher, where Mr butchers and Mrs takes your money, is five minutes’ walk away, while the baker is literally across the road. There are lots of local wines. Take the selections by the glass. Try, perhaps, Epesses Les Terrasse de Valerie, Henry & Vincent Chollet, Lavaux-Oron, Vaud 2013, or Syrah du Valais OC Maitre de Chais Provins, Valais 2009 – the most expensive wine by the bottle, from Switzerland, is Castello Luigi Bianco del Ticino 2010, at CHF 215, although for those ignoramus who just want the most expensive, regardless, there is a Pétrus 2008, at CHF 5,550 (there is also, in one of the wine cabinets, a display of 66 different vintages of the artists-label Ch Mouton Rothschild that ran from 1945 to 2010). 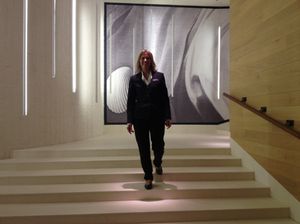 At breakfast, the buffet has five named honeys, plus a big framed honeycomb. There are six Royal Selection flavoured vinegars and an absolutely addictive lemon-flavoured olive oil that was just superb on brown toast (have I invented a new dish?). Juices are squeezed in front of you, invent your own combination. But I must hurry…Mr Meier was insistent I understand the spa, and it is serious. Jean-Michel Gathy has put curving walls of rough stone or unvarnished wood, with champagne marble floors. From the spa reception, 13 straight stairs led down to the bootcamp area, namely that gym. Twenty-two gracious gala stairs, ideal for a catwalk, wind up to the soothing area of the spa rooms. This whole complex is overseen by an Austrian specialist, Irmgard Kucher, who personally did an emergency nail job for someone just arrived. 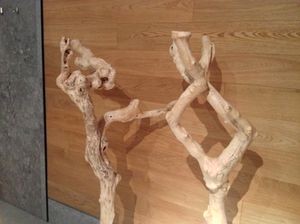 Dancing wood sculptures in the spa

The spa, like the rest of this luxury hotel, has lots of talking points. I thought this sculpture of driftwood looked rather like a tortured pair of bodies, waiting to be eased in the spa. Perhaps, after the signature three-hour ‘Alpine journey’, which started with a foot wash and included every part of the anatomy, any body would have turned stress-free.