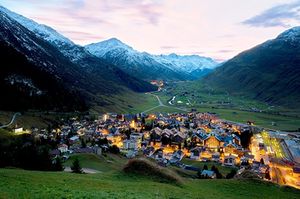 Around Swiss National Day, 1st August, good Swiss – and of course all Swiss are good, as well as highly successful – think not only of their homeland and their home town but also where they did their military service. There is a high chance they have spent some of that spell at Andermatt, 1,400 metres above sea level in the Unseren Valley, in Uri canton. It was always charming, and in 1872, Sebastian Christen opened the then-luxury Bellevue hotel, for tourists taking stage coaches across the Gotthard pass. Ten years later, a railway tunnel killed that business, says the gal. Hence the military having a base here from 1895 to 1999. Today the town is a centre for skiing, winter long, and hiking for the rest of the year. 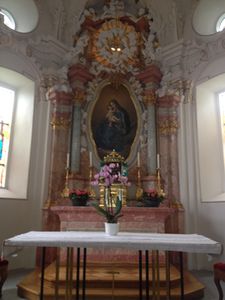 I hiked along the main, boomerang-shaped street, Gotthardstrasse, and up to a delightful little church, overlooking the valley – known as the Mariahilf Chapel, it was built about 1735 as protection from avalanches (it would take the brunt of the snow, thus saving the village below). At five o’clock precisely, a carillon started from the main church, St Peter and St Paul, below, and went on booming out for 20 minutes – 95 percent of the 1,400 who live here are Catholics. A very high proportion are involved in Swiss hospitality. Gotthardstrasse is back-to-back tiny hotels. I liked the look of the Aurora, which still incorporates the red and yellow forecourt canopy of what had been the gas station that was used in the 1964 James Bond movie Goldfinger. My favourite local restaurant is Bären where daddy, Guerino Coldesina, in pristine white outfit matching his shock of hair, cooks, and Diane von Furstenberg’s double, his wife, serves, with their son (try daddy’s home-made spätzle, superb). 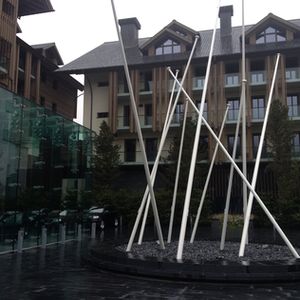 Entrance to The Chedi

But now there is a VERY SPECIAL development in town, that is already putting Andermatt on the luxury hotel map. What was the military area is already an 18-hole, par-72 golf course, designed by Kurt Rossknecht. The developer, Orascom’s Samih Sawiris, says there will be at least four hotels, two of them at luxury level. One, The Chedi, is already open, and last Sunday morning it seemed every visitor in town was calling in to have a look – it was, admittedly, a grey mist-shrouded day, not ideal for outdoor activity. Arrive at the six-floor chalet, designed inside and out by Jean-Michel Gathy, and you are greeted by ten enormous knitting needles, set at angles as an art work. 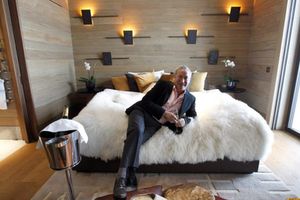 Samih Sawiris at The Chedi

There are art works galore here, as you will see. Samih Sawiris wanted his hotel to be a talking point for a myriad of reasons. First, size. The smallest of the 50 standard rooms is 560 sq ft (there are also 55 even-larger condo suites, in the letting pool).  All 105 units have cantilevered balconies – I loved 1506, looking down over a 900 sq ft square pool, decorative but, when frozen in winter, it becomes a skating rink (there are, by the way, two other pools, a serious indoor pool leading off the lobby and a discreet outdoor pool, and then there are the spa pools, of which more anon). 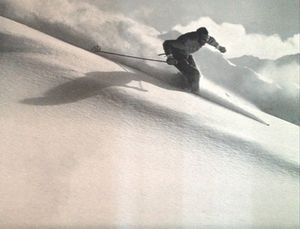 The beds are Swedish (Hästens), the cashmere throws unnamed Italian, the minibars have two sizes of Taittinger. Floors are Swiss granite or unvarnished local oak, also used for most of the bedrooms’ walls. One wall of 1506 is entirely taken up by a deliberately-fuzzed ski photo, another is saddle-stitched mushroom leather, also used for the generous number of drawers and matching handles. Oh yes, all rooms in this luxury hotel have electrically-controlled log-look fires – including owned apartments, put into the hotel’s letting pool when the owners are not there, plus completely separate owned apartments, there are over 200 fires around. Three, in public spaces, are real wood.