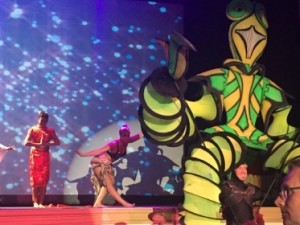 One of the many dance acts, somewhere, sometime..

There is continual entertainment throughout the entire duration of travel’s version of Fashion Week, Virtuoso Travel Week, this year August 9-13, 2015, Las Vegas. Part of the fun is actually watching the non-conference people wandering through the acres of main host hotel Bellagio, and weaving in and out of conference delegates enroute to the pool or whatever. There is entertainment, says the gal, as luxury hoteliers merely walk from one section of the conference area to another, perhaps past the Beauty Bar where travel advisors were being groomed and made up for photos to enhance their website image. Come back a few hours later and a trombonist plays while Raffles‘ Diana Banks offers welcome Singapore Slings, celebrating their birth, a hundred years ago, at Raffles Singapore. 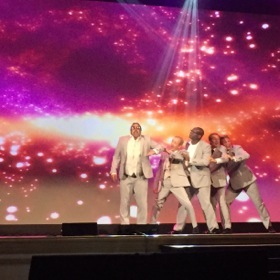 The formal opening Forum included serious talks on selling, and passion (by Ferruccio Ferragamo‘s son Salvatore Ferragamo, manager of the family’s Il Borro luxury boutique hotel and vineyards) and the future (watch as lifetime travel planning is taken even more seriously, for some running as a component of Merrill Lynch‘s lifetime financial planning). This section ended with an explosion of different shapes of very-London manhood bursting on to the stage, rolling and gangnam-ing and pretending to be creaked up with aches and pains. One had married, only last week, here at the Bellagio Wedding Chapel and his wife joined in, in short white dress and veil. 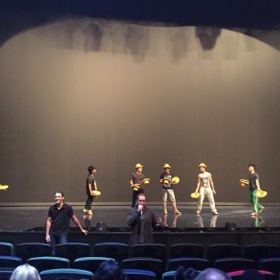 The 60 invited media had a programme, too. They did have an afternoon of four-minute speed dating, which was a good chance for some to catch up with long-time hotel friends and learn about the growth, from cruise companies, of more intimate clustering – think executive clubs – on board mega ships, and, everywhere, growth of river-cruising. Media also had a big BIG thrill. After a lunch at Delano Las Vegas we were taken into its marsupial-parent Mandalay Bay‘s giant theatre for a rehearsal of Cirque du Soleil‘s Michael Jackson ONE. The onsite producer, and creative director, of this show explained how the artists practise, and we watched some Chinese hat-magicians warming up, and getting faster and faster. 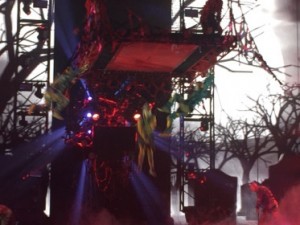 And then a woman sitting in an inner-lit crescent moon glided right overhead, across the audience, and sang to an acrobat shinning up and around a rope that hung down from the ceiling. Finally, the main stage opened to reveal a set with moon-like buildings, which obviously had grab bars on them, and a central tree house with trampoline roof. Acrobats in sequence threw themselves diagonally from building top down to the ground, bounced up to treehouse and down again, and back up to the treehouse’s trampoline base and on to a side wall, and so on. Oh how I wished luxury hotels would put such a quick-fit facility in their gyms… how I wished this would go on forever, but even this, and eventually Virtuoso Travel Week, had to come to an end. For this year.