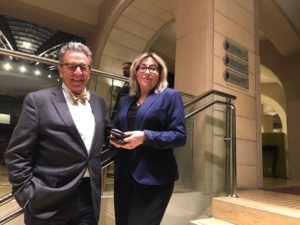 At David Citadel, Jerusalem, it was time for Israeli street food, which the gal shared with her Melbourne-born Israeli friend, Rodney Sanders, and the equally entertaining Katerina Brokhes, born in St Petersburg but now as knowledgeable about Israel as anyone who was born here.  She is head of sales for this hotel, and a sibling Alrov Luxury Hotel, the Mamilla, literally just across the street. This one, the David Citadel, was developed by Ladbrokes’ boss Cyril Stein after years of mix-and-switch in Jerusalem. Yes, what is now the Crowne Plaza was once Hilton brand. Then Stein foresaw the David Citadel as Hilton but real estate entrepreneur Alfred Alrov came into the picture, and after a seven year battle, and a pay-off reputed to be $20 million to Hilton, Alrov fiinally gained legal control of the 385-room David Citadel in 1998. 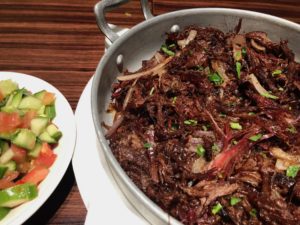 Shawarma, in a metal skillet

David Citadel has since run as an independent, and thanks to Katerina Brokhes and other initiatives it runs extremely well.  Over 94% of customers are tourists, of which 75% are from the US – a dear American friend brought his son here for Bar Mitzvah at the Western Wall, which, typically, meant the entire family, in this case 13 total, coming for nearly a week.  Also, for sightseers exhausted after touring yet more historical marvels, the hotel offers recuperation, with the pool, and massages, and local comfort food, also known as Israeli street food. The hotel’s La Scala automatically starts you with a sharing mezze plate, as above – I especially loved trying the green-filled falafel with heavily-garlicked eggplant purée, and bits of greenery. You choose your main course, say lamb shawarma, marinated for six hours, cooked for six hours. 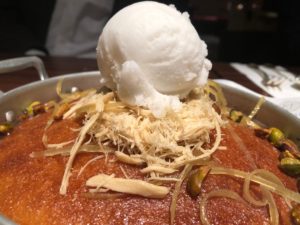 We did not order dessert  but it came, anyway, in the form of a semolina pudding surmounted by a ball of lemon sorbet and strings of lemon peel. We drank the house wine…  Rodney Sanders told, as always, lots of stories, including the challenge any hotelier has in Israel by not only having to have two separate kitchens, one meat and one dairy, but also four sets of china are needed – everyday dairy, everyday meat, Passover dairy and Passover meat. He also has to accommodate varying religious laws and customs, but Rodney Sanders can cope with anything, even when a Shabbat elevator, programmed to stop at every floor, breaks down – he related how, at that first, now the Crowne Plaza, a Shabbat wedding saw the bride (who had close connections to the Hilton brand) in the top floor Presidential Suite having to walk down 21 flights of stairs in all her finery as the elevator chose that moment to go ‘sick’. 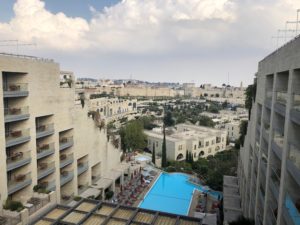 And of course during Shabbat, work is prohibited under strict Jewish law (although what constitutes work may be disputed).  Rodney Sanders’ chef, Avi Turgeman,  at this highly successful David Citadel hotel can walk around the copious Friday evening all-cold buffet, attracting hundreds of guests, but cannot do anything, or touch anything.  Fortunately I was there on a non-Shabbat day and, as one of the videos showed, two omelette chefs were working flat out producing bespoke dishes for the over-500 tourists who all seemed to be breakfasting simultaneously.  Sometimes, I am told, they do over 900 breakfasts. I retreated, to the calm of my room, 1046 – a typical Piero Lissoni understatement – and looked down again at the beautiful pool, and across to the Old City. SEE THE BUSY BREAKFAST BUFFET, AND THE QUIET OF 1046