And the brand-new SALT Palmar hotel 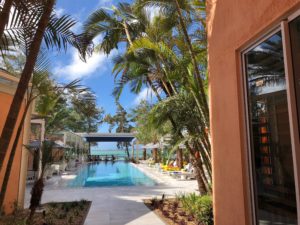 Having already been so impressed by LUX* Grand Gaube, the gal did have to wonder how this Mauritian luxury resort could possibly have a new sibling that was different. Well, guided by Lux Collective’s visionary CEO Paul Jones, SALT of Palmar, which opened November 1st, 2018, is as different from LUX* as black is to white – or, in this case, whereas LUX* properties are known for empathetic Kelly Hoppen interiors that are mainly taupe and white, SALT is as colourful as can be.  And SALT has what is claimed to be this Indian Ocean island’s first rooftop bar. See above.  Arriving at the 59-room hotel, previously the Palmaraie, you look past the pool to the sea. 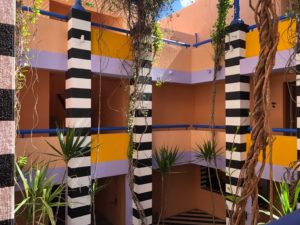 Around you, the three-floor C-shaped building is a riot of blocks of colour, which extends to stairwells (this was an old building, with no elevator, so you get a good workout going up to your room). For SALT, Paul Jones deliberately turned to an artist rather than an interior designer.  Be different, he told Camille Walala, and you can see the colourful result. Paul Jones worked on the SALT DNA with Katie Brinsmead-Stockham, a gig-economy Londoner. SALT is eco, saving the world through the locale, which includes your immediate neighbours round the pool or in the casual restaurant (no buffets, to reduce waste, and as much food as possible will come from a designated artisanal farmer). 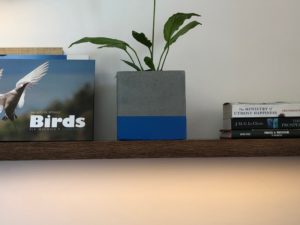 Bedrooms have books and plants instead of minibars and televisions

You are not expected to spend time in your bedroom here.  There is no minibar, no television, but you have a few carefully-chosen books, a Carpe Diem bed with 500-thread sheets, and the softest-possible pale lemon washable robe apparently made from coffee grounds. You have a yoga mat, but there is also a good, if bijou, gym (24/7, which is not as ubiquitous as it should be on this island).  I was also really impressed by the five-room Equilibrium Spa, which has a salt room, its walls and floor covered with rough Himalayan salt, the entire space gradually, in turn, going through all the colours of the rainbow. 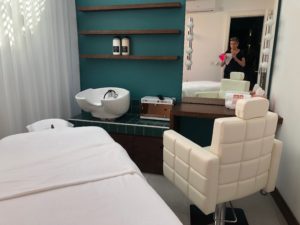 As part of the community involvement that is integral to the SALT culture, Skill Swap is one of its unique, and commendably trendy, elements.  Teachers, for instance, can be put in contact with local schools by one of the hotel’s concierges.  If they subsequently do half a day’s volunteer tutoring, everyone benefits. The hotel’s 140 staff also volunteer, say by giving blood, or working with local charities  (all staff, by the way, have at least 168 hours of training, in work time, every year). Yes, this is a really thoughtful new-wave luxury hotel: the restaurant even has a 100% vegan Raw section, with zucchini pasta and cauliflower biryani – it also has, as one of its morning options, what it calls a ‘big brekkie board’, which consists of eggs with baked beans, smoked bacon, avocado, potatoes, sausages and tomato, plus barbeque sauce and sourdough toast.  The idea of no buffets, says hotel GM Raj Reedoy, is to cut waste.