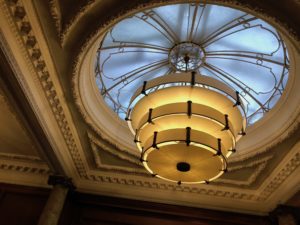 What are the first words that come to mind when you think of the Scottish countryside?  For the gal the list, in alphabetical order, includes golf, rain, raspberries, salmon, tartan plaid, and whisky. All, with the addition of uncertain weather, can be found in abundance at one of the world’s iconic luxury hotels, Gleneagles. Much more than a lodging, it is a way of life, as shown by the over-65% of guests who return to stay, again and again, and by the fact that there are over 2,000 local members who come, sometimes many miles, to the 850-acre estate, for its golf courses, dozens of other sports and for the wellness facilities.  After five years away, I wanted to see what had changed. The main 1924-vintage building of this luxury hotel is still a historic gem, but with new highlights such as giant chandeliers, and marble panels that exactly match the original mottled green columns, the lobby looks as if it has always been like that. 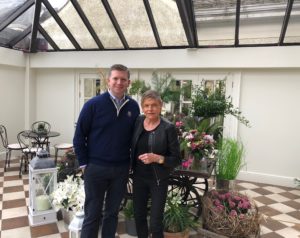 Gleneagles now belongs to Ennismore, run by Sharan Pasrich, whose family had long been Gleneagles regulars.  This is a strategist who obviously believes in investing in the best, but leaving those on the job to get on with it (he is, obviously, otherwise engaged as apart from other pursuits he is expanding his Hoxton brand – and he is also going to do the first of his Gleneagles clubs in Edinburgh, in the former Bank of Scotland building in St Andrew’s Square, and in London, in Grafton Street, Mayfair). The guy who runs things at Gleneagles, by the way, is Conor O’Leary, who has a really strong food background, in several top London hotels as well as, latterly, Grand Hyatt Dubai. It was eye-opening to see the additions here since my last visit. Birnam Brasserie, with an open kitchen and a year-round conservatory, is super, casual-chic.  Here, a whisky sommelier chose, from over a hundred labels, a Tullibardine Highland Single Malt Scotch Whisky 228, finished for 12 months in 228-litre red Burgundy wine casks from Chateau de Chassagne. Now owned by Picard Vins & Spiritueux, the distillery is nearby in Blackford. 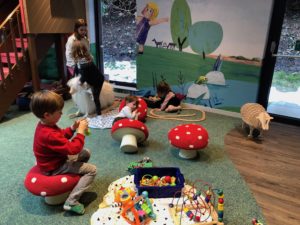 Sadly, only little ones allowed in the gorgeous Den

I later saw that Century Bar’s Classic Cocktail list includes a Blackford, composed of Tullibardine, plus such other ingredients as a green Chartreuse, imported of course but for most products Gleneagles epitomises Scotland. My Birnam dinner was six Loch Creran oysters, followed by Ayrshire pork belly. The goes-on-for-ever breakfast includes Scottish oatmeal porridge with stewed local raspberries, and Loch Fyne kippers. Before leaving I lunched sitting up at the Century Bar counter off smoked salmon from Campbell’s in Perth – above, see intense flavoured, smoked with whisky-barrel shavings, on the left; mild, with seaweed, in the centre, and light-smoked, with London Dry gin and juniper, on the right. This all seemed quite advanced, but simple, gastronomy, and for those who want a plain glass of bubbly, the new American Bar, a little-black-dress venue of several intimate rooms, is a big draw – and OH the fluted glassware, by the new king of English edible and potable ware, Richard Brendon.  That is adults only: for kids, and only their parents – no other adults admitted – the new series of Dens is absolutely adorable (the first two hours are free, so mum and dad can go off and talk polysyllabically, or not talk at all). The old kids’ club is now a residential-feel series of small meeting rooms. 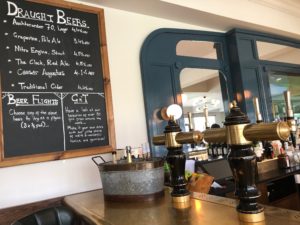 Beer on tap in Auchterarder 70

Hotel florist John McDonald has a permanent trolley of flowrs-to sell.  The luxury hotel’s former sales office, a separate house, has become Bob & Cloche, a beauty area where oodles of girlfriends can have manicures simultaneously, away from the regular dowager who always has her shampoo and set Saturdays at nine.  I walked from there to the golf club house, which last week re-opened its all-day Dormy grill, now with tandoor ovens and a pizza oven (its indoor-outdoor firepit bar, with personalised bottles of Johnnie Walker Blue Label, is now complemented by an adjacent Auchterarder 70 lounge, named for Gleneagles’ original phone number – this has beers, including a 4.4% alc. Auchterarder 70, on tap). No wonder, by the way, people do come back again and again, just to try all the eating and drinking. I did have time to see a waiter in Andrew Fairlie’s Michelin-starred eponymous restaurant meticulously ironing cloths, on the tables, before service, and I was amazed at the full-house for afternoon tea in the new Glendevon room. £40, with three-tiered curate stands, scones with the hotel’s own-label Gleneagles & Co’s blueberry and Glenturret-whisky preserves. And cream of course. Thank goodness for Gleneagles’ fitness. The golf is legendary, and plans are already under way, following the 2014 Ryder Cup, for two more significant events, the mixed European Golf Team Championships, August 10-12, 2018, and the women’s-Ryder, the Solheim Cup, September 13-15, 2019. And, after such a whirlwind of vignettes, one of the tweed-suited chauffeurs already had my newspapers in the BMW-X5 – Wifi #loveglen – and off we went. I need to come back for more of this Gleneagles way of life, soon. AND NOW SEE ROOM 324, AND WHAT THE LOBBY LOOKS LIKE AT 6.45 A.M.