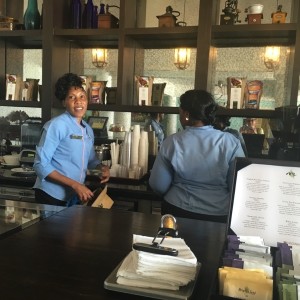 The only staff members who ever seem to leave the luxury Half Moon Bay hotel are those tempted by work permits for the US. Others stay, and stay. The gal had met up with Solomon, Manager at Sugar Mill Restaurant – he is a 52-year veteran. Wow, what he had seen, and the changes, during those years! Room maids say they are relatively new, only five years, or ten years. This is their family. They have a cricket pitch and a football field and annual Olympics, which apparently get somewhat bloody. The staff are local, and so is the art. The big photos over the last few days have shown pieces by Michael A. Clarke. The photo above is one of three by Michael Lester Leszczynski, a local sea-captain who turned to art. The coffee kiosk at the back of the hotel’s main lobby is called Lester’s, in his honour, and there is a Lester’s Bar, cantilevered over the ocean. 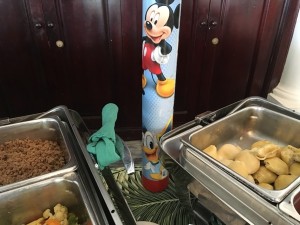 Yes, this is the kids’ buffet

Many of the eating and drinking venues are waterside. Lunch at Pepperpot is a fascinating memory, for it has local food. As we watched the ocean, I tried stewed ackee fruit, supposedly introduced by Captain Bligh from here to Kew, England, in 1793: the locals cook it for five minutes, and serve it with goujons of cooked saltfish. After that I went on a casserole of goat with little bits of potato and carrot, and tarragon – and a mound of rice that seems to be essential to every local meal. Ah ha, I did notice, however, parents sneaking over to the low-set kids’ buffet at the all-day Seagrape restaurant, specifically for the French fries (this is a superb restaurant, two-thirds of it outside, its tables shaded by lots of low-set trees – see the video below). 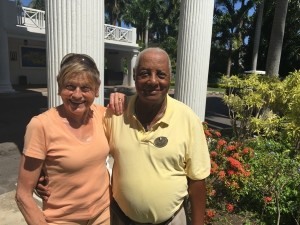 One night we dined at Il Giardino, the Italian restaurant at the rear of Seagrape. The chef, Cosimo Riccardi from Naples, is a most engaging fellow who seems to spend as much time out chatting to guests as in the kitchen, but he does produce superb south Italian cuisine which certainly meets the high standards of that Italian connoisseur Sandro Fabris, GM of this lovely place.  During my stay at Half Moon, I met chefs and concierges, and bellboys and beach cleaners, all of them cheery guys and girls who somehow seem to do what they are supposed to do, with passion and efficiency combined with Caribbean laissez-faire. I even met the doyen of the 908-strong workforce, Watson Wordsworth, here for 54 years and still, as Estate Manager, going strong as ever. 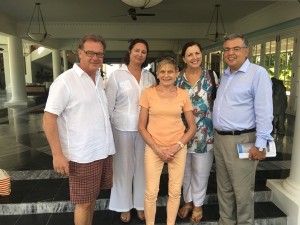 This is a luxury hotel that combines privacy – it is so easy to hide when there are over 400 acres around you – with being a people place. Meet up with friends, in the spa or on the course, or by one of those 54 pools, or make new contacts on activities. I actually met up with people I did not know were here, Andreas and Carola Augustin, writing their 52nd book in the ‘Most Famous Hotels in the World‘ series. Yes, the tome of this luxury hotel should be out before the end of the year, and then more of the story of the people who built, and who today maintain, this paradise will be told (will the book also include the 1951 Cadillac used for VIP airport shuttles?).