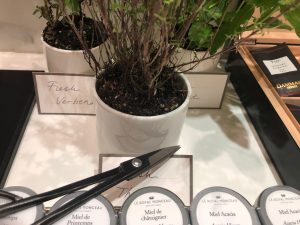 Living herbs in my room

Ever since it re-opened as Raffles in 2010, Royal Monceau Paris has made statements, not all of them what one would expect of a luxury hotel – the gal cites sculptor Nikolay Polissky’s lifesize herd of deer on a first floor landing, fashioned out of unpainted recycled wood and possibly a nightmare for Housekeeping to sanitize. But, to be honest, Philippe Starck’s overall interiors are so ornate it must take much longer than industry norm to clean any area (question, is this part of luxury? many would beg to differ). Elsewhere this 149-room hotel, on avenue Hoche, a mere five minutes’ walk from Etoile, oozes luxury, again and again. As the video below shows, suite 300 was a textbook of perfect fresh fruit displays and sometimes quirky, stylish reading matter, say Diane Venet’s Bijoux des Artistes, de Picasso à Jeff Koons. By the tea kettle in the kitchenette were labelled pots of growing herbs, with scissors, to make an infusion whenever you want. 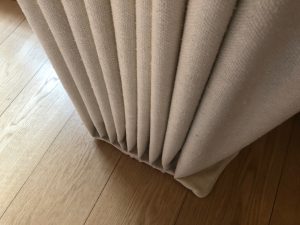 The stage management of this drama is perfection. The heavy beige drapes are electronically controlled but look how, when I arrived in daylight, someone has exactly folded the folds. Go downstairs to the conciergerie and there are neat stacks of latest books, chosen by concierges, who know what their guests like to read. I dined in Nobu-San’s Matsuhisa Paris, one of two Michelin-starred restaurants here. Of course our table had to have black miso cod but our chosen shared appetizers included a sunburst of sashimi Nobu-style – see above.  It was such a picture it could have warranted hanging space alongside his many sunflower interpretations in the Van Gogh Museum in Amsterdam. Actually this Paris hotel has always merited a bye-line label as an ‘art hotel’, long before calling a hotel in, say, mid-west USA an ‘art hotel’. You got there first, Royal Monceau, with Art For Breakfast and so on. 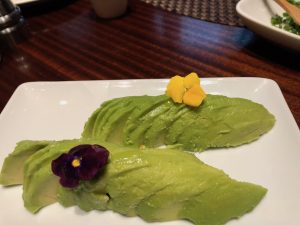 Now here is an interesting thing. At dinner with Julien Barges, who moved here a couple of weeks ago to ‘direct rooms’, to use a never explained industry phrase, Matsuhisa seemed 100% Japanese, with shouted greetings, whenever a new guest arrived, from the ten or so crisply attired chefs working at lightning speed at the far end of the room.  At breakfast the restaurant operates as La Cuisine, and the set is transformed.  That kitchen has given way to a series of food stations for one of the best buffets in France, with Pierre Hermé’s Isfahan croissants perfumed with rose water, and hotel-bespoke preserves made specially by Michel Martin. Being on-trend, I ordered avocado to go with my omelette, and look at the picture that arrived. Yes for all the Starck statements around this memorable hotel, there are even more pleasure points of sheer beauty. 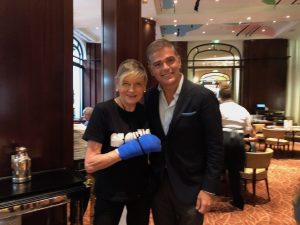 Take the lowest-level wellness floor, which has 225 outside members.  They, like hotel guests, descend to corridors lined in whiter-than-white curtains, floor to ceiling. Look along one corridor to a warm eggshell glow at the far end. This is yellow seating in a fitness relax area. Halfway along that particular corridor an alcove has beverages and edibles, and each piece of fruit, including bananas and nectarines, is in perfect condition, and perfection to eat. This brings me back to what is luxury.  It is not, I say firmly, spa fruit consisting of a metal bowl holding merely shiny green apples: that is common-or-garden mainstream.  Fortunately this hotel has many custodians who do also promote luxury. I think of GM Aaron Kaupp, and the owner’s representative Omer Acar, who even did a detailed work study in perfect fruit when, in an earlier life, he left Four Seasons to head Harrods’ famous Food Hall. SEE A VIDEO OF SUITE 300