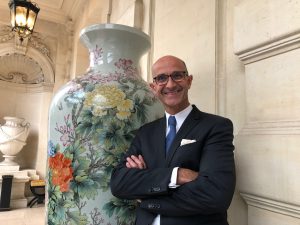 This is the Paris hotel that young upwardly-mobile, and already successful, Chinese love – many of them already know the brand, says Guy Bertaud, GM of the 101-room Shangri-La Hotel, Paris. They want to stay in a luxury hotel that is also an authentic Parisian palace. This one was built in the last decade of the 19th century for Prince Roland Bonaparte, a great-nephew of Napoleon. Current owner Shangri-La Asia worked with architect Richard Martinet, and with Pierre-Yves Rochon for interiors that skilfully include just a few valuable Chinese ceramic urns in a theatre that is quintessentially of the ornate lacquer and gilding style.  The hotel opened in 2010 and achieved the French hotel industry’s coveted ‘palace’ status four years later. 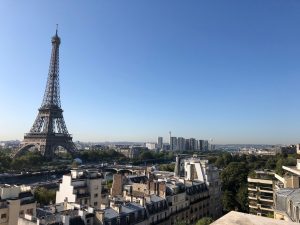 The location is also a major draw: the seven-floor palace is at Iéna, directly across the Seine from the Eiffel Tower. Obviously not all rooms face the Tower but everyone wants one – if it is possible, those I staying in other rooms, facing other directions, may be allowed quickly into a Tower-facing room or suite to take the necessary selfies.  I was in suite 606, full of light and fantastic views, across and up and down the Seine (see a video below). I also had a terrace big enough for a small wedding reception.  I longed to spend more time out there, savouring and identifying the 360-degree view. Next visit… Next time, too, I must return to Le Bar Botaniste, to see what the mixologists are up to. By then, three of the hotel’s duplex suites will be re-themed as Parisien suites, with yet more antiques for those Chinese to photograph. 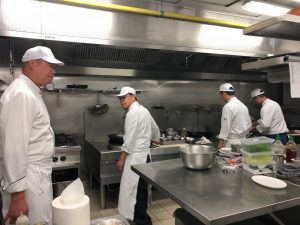 Typical guest stay is three nights, with Americans making up 25% of all business. Chinese stand at 15%, and growing fast. They will usually dine the first night at the hotel’s 48-seat French restaurant, L’Abeille which has two Michelin stars, and then retreat to its Cantonese, Shang Palace, which has one Michelin star.  What is so sensational about Shang Palace is that the entire 17-strong kitchen brigade is Chinese, transferred from other Shangri-La hotels.  I had the great joy of going into the kitchen – see a video below. I must admit I really enjoyed our dinner, which included mixed barbecued meats (and the Gevrey Chambertin Dme Anlaud 2016 was perfect). 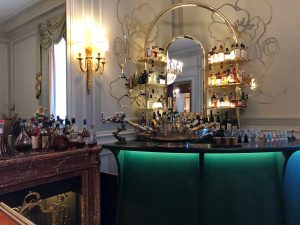 Bar in one gorgeous salon

The creative people who conceived and executed the transformation of this Bonaparte palace, and those who run it, have made the many salons into works of art. Local businesspeople conduct whatever – WeWork with style. Ladies who lunch meet up, say in the salon at the top of this page. Men of a certain age seem to spend an awful lot of their days simply sitting and reading Le Figaro. Cleverly, there is a bar in one corner of a salon: this is a luxury hotel that knows that every little helps when it comes to beverage sales, and all this summer they have had a highly successful pop-up Krug Bar on a terrace. That is another brand that Chinese know.  No wonder they like this particular luxury hotel. HERE ARE VIDEOS OF ROOM 606, AND THE SHANG PALACE KITCHEN