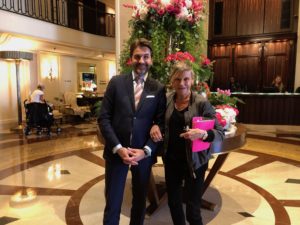 After the military history of the previous night, the gal headed for Hollywood history. What is now the luxury Beverly Wilshire Beverly Hills, a Four Seasons Hotel, was opened in 1928 by developer Walter McCarty. He had what he called the Beverly Wilshire Apartment Hotel built in Tuscan stone and Carrara marble in Italian Renaissance style – evident in the two-floor fitness block, see above. Fast forward to 2018 and this is the up-to-the-minute place to be seen, now under the care of just-arrived GM and RVP Peter Humig, only a few days off deplaning from his previous New York City posting.  We met under the lobby’s flowers, as beautiful as is the norm in a Four Seasons property. And, as always, there were highlights of style everywhere (where else do the day-glo purple bathroom toiletries, which happen to be Salvatore Ferragamo Tuscan Soul, exactly match the purple flowers on the front of the room service menu?). 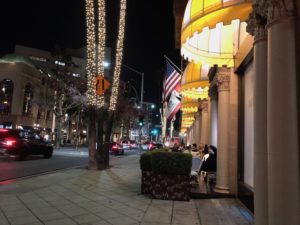 Outside terrace, at night

Actually the room service menu cover also shows, in black and white, an alluring female, in white net gloves, with the words ‘one cannot think well, love well, sleep well, if one has not dined well’.  I certainly slept magnificently here. The hotel today has a total of 395 rooms, some in the newer tower, completed 1971 fronting on to Wilshire, the others in the original tower, where I stayed. Suite 1277 has two curved French windows leading to five foot-deep balconies giving lovely views down to the pool below – now, the loungers and cabanas around are black-highlighted-in-white, suitably chic for Hollywood. Now, too, the places to be seen at the Beverly Wilshire include the main restaurant, THEBlvd, not only inside but also on the Wilshire pavement sidewalk terrace, fortunately heated by Bordeaux burners. 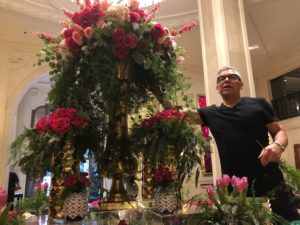 I also dined, or at least ate, marvellously here. Wolfgang Puck still has his CUT restaurant and bar, both designed by Richard Meier, in the hotel but it does seem that THEBlvd is gaining market share and prominence every time I see it.  I needed to be early for breakfast – so early that a florist from Square Root was doing his daily tweak of lobby flowers that have a main change-over every week. By the time I left THEBlvd tables around me obviously hosted movers and shakers of the Hollywood entertainment world as well as at least one owner of another Four Seasons hotel, who I think had flown from  San Francisco specially to meet the new GM. Breakfast, by the way, is typically Californian, with such suppliers as Knoll, and Murray Weiser Farms, listed. (While in China provenance is needed because consumers there are scared of fakes, in California who grew a particular edible is part of gourmet knowledge.) 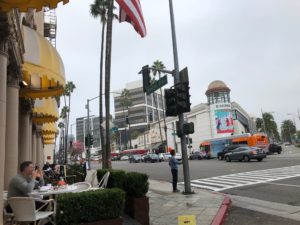 California breakfasts are generally healthy.  Here you can have THEBowls, which include a black bean Buddha, a bowl of avocado, roast squash, steamed kale, fried chickpeas, and sorghum lemon tahini drizzle, and you might choose a green goddess smoothie (Granny Smith apple, kale and spinach). You might let rip and go for Truffle Brothers, a frittata with black truffle, plus peas and Parmesan Reggiano. While drinking really good coffee, from a Spring USA stainless pot, I read a really excellent full-colour yellow folded sheet showing today’s weather, and what is on tonight – sadly Jonathan Wilson at the Fonda Theater will have to wait as I will have gone on my way. First, however, I took a walk around, to check the store windows. Now, directly opposite the hotel, Rimowa, now part of LVMH portfolio, shares an A-list retail building with Louis Vuitton.  I also wanted to see what this luxury hotel’s terrace looked like before mid-morning. NOW SEE SUITE 1277