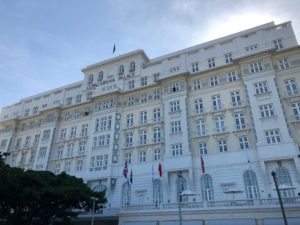 The view from Belmond Copacabana Palace is truly sensational – the image above is taken from the balcony of top-floor suite 601. But then the wedding-cake façade is uniquely memorable, too.  Architect Joseph Gire based the hotel on the Carlton in Cannes and Le Negresco, in Nice. When it was built in 1923 it stood alone and proud on Copacabana Beach, but it attracted other buildings, and in 1970 Roberto Burle Marx tidied up the three mile-long roadway in front, putting in thousands of black and white mosaic stones, in Portuguese style. Now what is called Avenida Atlantica is side-by-side hotels, says the gal, but it is still ‘the Copa’ that dominates. Over the years it has been so lovingly restored that apparently 11 shades of white are used on its exterior, both the six-floor original palace and, behind it, its 11-floor Tower annexe, added in 1948. 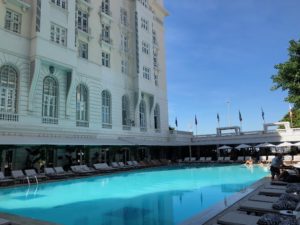 .. and the main pool

For many guests the 30-metre pool, flanked by both buildings, is the heart of the hotel, and sunworshippers have their favourite chairs from the moment light dawns until early afternoon (those in the know apparently order pizzas, which are said to be outstanding, from the pool bar). This hotel, which has a total of 241 rooms, is beloved of so many. Roughly 20% of staying guests are repeats, and some of the most loyal have formed an unofficial ‘Copa club’, to fly in here from Amsterdam, Frankfurt, New York or Rome, or wherever, to party seriously, which they do twice a year.  At the same time locals use it, for meals, for special events and just to network. 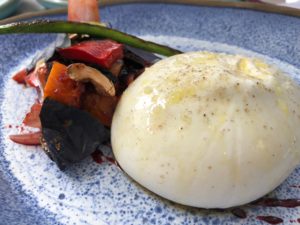 I missed the 400-guest wedding of television celebrity Isis Valverde who had met her now husband at a pool-side function. A photo gallery inside has 128 signed portraits of celebrity guests, the latest being Phil Collins.  I did wonder who all the people were around me as I sat by the pool, under the awning of Pérgula, having a simple lunch, just a starter, a simply gorgeous whole burrata, its creamy centre oozing out in a most wicked way.  It came with sautéed Mediterranean vegetables and a beetroot reduction, on a most attractive ceramic plate with its edges turned up. 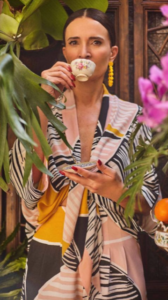 Andrea Natal has been at this hotel for quite some time (a driver later told me he had worked with her at another hotel in town when she was 18). She looks ageless, in fact.  Perhaps it is the Biologique Récherché in the spa or practising for the Carnaval. Every year, on the Saturday of Rio’s worldwide-famous extravaganza, she hosts the best party in town, for at least 1,500.  It always has a theme and the boss, here, dresses up with the best of them. She did actually admit that in another world she would like to have been an actor…  She already creates.  A year ago she turned her concierge desk into a most attractive, and highly profitable, AQUIM chocolate stall – the concierges moved across the lobby to share space with reception staff. AND NOW YOU MIGHT LIKE TO SEE MY SUITE, 203, FACING OVER AVENIDA ATLANTICA AND COPACABANA