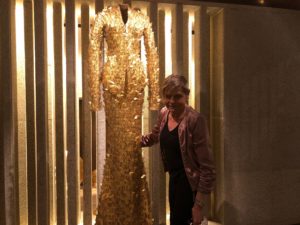 RuMa (‘house’), in Kuala Lumpur, is Urban Resorts’ first hotel outside China – it came about, says the gal, because Malaysian developer Datuk Lai Siew Wah stayed at Urban Resorts’ The PuLi in Shanghai and like so many, he loved it.  He wanted a luxury hotel just like it.  What has opened is a celebration of Malaysia past and present. The exterior of the hotel has a delicate antique bronze lattice. Go in past six antique wood columns and the ante-lobby is reminiscent of entering a mine.  Go further in to the main 30 by 7 metre lobby, the ‘Grand Salon, which has a copper ceiling wrapped-down to the walls. A highlight, on the 27 curved stairs from the Salon up to the restaurant, is a fullsize kebaya ‘dress’, by Bernard Chandran: it is formed entirely of real-gold butterfly shapes, each three centimetres long. 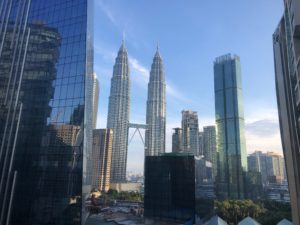 The hotel has been overseen from signing stage by Urban Resorts’ Markus Engel – just announced as Stelliers 2019’s Corporate Hotelier of the year. RuMa’s designers, MQ from Shanghai, working in tandem with Urban Resorts’ ultra-creative CEO Markus Engel, deliberately set out to make this 250-room hotel – which also has 200 residences – the kind of home with which any global Malaysian aesthete could well empathise.  Yes, this person might well collect tea sets.  See the display, above, behind the Salon’s long, low counter that is the equivalent of front-desk-meets-conciergierie.  To one side of the Salon is a Library, with an eclectic collection of old and new books, with such tomes as Street Food Asia, Life is Meals, 100 Million Years of Food, and a big book simply called Fashion. Upstairs, bedrooms are sleek, edgy (see the video, below, of suite 1006). Black Venetian blinds seemingly permanently cover the windows: washbasins are black-wrapped copper and bronze, hemispherical in shape. Toiletries are bespoke, the espresso machine is a simple Nespresso. 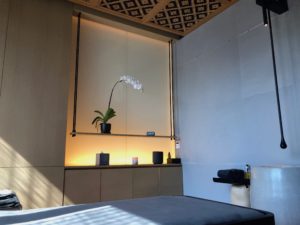 A UR SPA room

This is a hotel for the fit. The sixth floor is partly exposed, along one side, to the elements, forming a giant terrace, with, cantilevered over the void, a 30-metre pool, its interior black at base, rising to gold. There is an excellent 24/7 Technogym here, and, discreetly reached round the back, via a bush-lined walkway, the five-room UR SPA, with kelerai screen walls and ceiling. Had there been time I would have gone for the 90-minute UR A Goddess to combat city life, stress and pollution, but as it was I was really happy with a 30-minute warming back, neck and shoulder treatment.  Guys, I guess, are also happy for going for a Trufitt&Hill shave, as from the London operation that goes back to 1808. 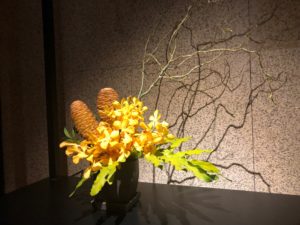 By contrast the food here is absolutely modern. Enter the all-day Atas (‘upstairs’) past a flower display that is one of the few bursts of colour in this luxury hotel. The restaurant stretches over several rooms: chairs are Peranakan rattan, tables have white marble tops from Ipoh, or brown marble, from Al Petra.  The Canadian chef, Tyson Gee, came from Park Hyatt Melbourne.  From the A3-size hard-backed menu, which offers Snacks, Starters, Charcoal oven and Accompaniment dishes, I went for heirloom tomatoes from Cameron Highlands with whipped tofu, basil and salted plum dressing. This was followed by Salt grass Australian lamb shoulder rolled with ginger torch blossom, garnished with slivers of cucumber and radish and a side of foraged fiddlehead ferns with dark soy and crispy shallots: the wines were French, Alain Geoffrey 2017 Petit Chablis, and Tannat Cabernet Franc 2014 Gran Fiesta Madiran.  It was a suitably stylish international meal, with the best of Malaysia highlighting the whole. WANT TO SEE ROOM 1006?