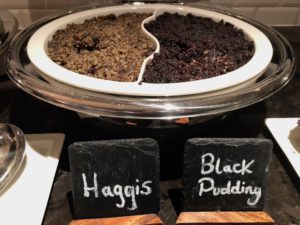 The gal had had enough of vodka.  Time for whisky, so where better than Scotland? And catching up with the most gregarious female hotelier north of the Border, Dale MacPhee, seemed like an admirable way to start.  Yes, you know you are in Scotland as soon as you get to Waldorf Astoria Edinburgh –the Caledonian.  Look in through the luxury hotel’s Rutland Street windows, above, to the Brasserie.  At breakfast time its buffet has some of the ubiquitous offerings associated with this land, namely haggis, and black pudding, both made from parts of animals that the squeamish might not like mentioned (the buffet is also complemented by a range of à la carte items that even includes a very un-Scottish flat omelette, egg white only, dotted with avocado and tomato and pea tendrils). 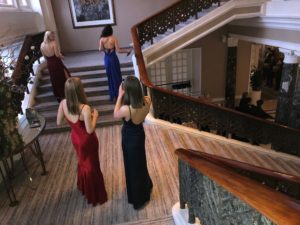 Actually I felt as if I was taking part in Downton Abbey during my really comfortable stay in this historic hotel.  I coincided with a ball for Edinburgh University students, some of the most elegant, chic and undoubtedly clever and savoir faire in the land.  The 1903 staircase formed a suitable photo venue for some of the young female party-goers, who seemed all to be wearing body-skimming full-length petticoat dresses, size zero with fabric to spare. A real fashionista haunt, this hotel: it is main sponsor of the next Edinburgh International Fashion Festival, April 26-28, 2018, and on Friday, April 27th, the organiser, locally-based model and influencer Anna Freemantle-Zee, hosts a catwalk show by OSMAN, and related panel discussions. 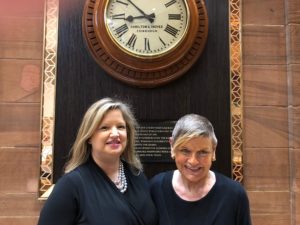 Dale MacPhee and ‘the clock’

Dale MacPhee is one of those hoteliers who is always looking for opportunities. Her hotel, often just called ‘The Cally’, has so much history. The Duke of Atholl laid the hotel’s foundation stone in 1899 – and its house tartan, from Royal Warrant-holder Kinloch Anderson, is based on the Atholl pattern, scarlet for the building’s red sandstone, brought by rail from quarries at Locharbriggs, Dumfries-shire; deep green for Princes Street Garden directly across Lothian Road; light grey for the rock of Edinburgh Castle, towering ahead, and black for the rail lines that culminate in Edinburgh Waverley station, 300 yards away. Today, after a brand-recognition poll, what is now a 268-room hotel is officially known as Waldorf Astoria Edinburgh – The Caledonian, and as of this January it has a new owner, entrepreneur Yusuff Ali.  There are apparently big plans to expand the building, taking in some of what is now a carpark immediately behind the hotel. There is already a stylish Guerlain spa and a sizeable indoor pool, but possibly the existing gym, in two rooms on two floors, 20 stairs between, will become more spa, with a new gym facility.  I just hope nothing will change in Peacock Alley, once an inner courtyard, now covered over (here, you find a rollcall honouring the 70 hotel staff who lost their lives in the Great War, and the Hamilton Inches wall clock that was once displayed in Waverley station. 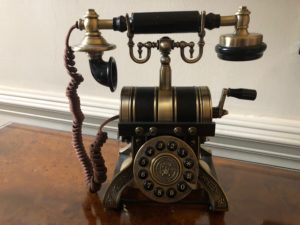 And of course nothing must change with dining at this luxury hotel – both restaurants are partnerships with the Galvin brothers.  At dinner in the classic Pompadour Room, looking out at Edinburgh Castle, I started my whisky tasting with a 15-year Glenkinchie Single Malt from a Diageo-owned distillery only 15 miles away – I was taught its palate is sweet, with a soft start that becomes flowery.  It was telling, by the way, that it was served, without question, in a shot glass, with absolutely no space for ice. And then, from Dan Ashmore’s tasty menu, I went for ceviche of Orkney scallop with watermelon towers, and pomegranate dressing, followed by beetroot-marinated short rib with tarragon and fresh horseradish. Back up in suite 106, I had time to think about its honoree, telephone inventor Alexander Graham Bell.  A headshot of him was included in fascinating black and white photographs on one wall, and suitably, I had an antique phone.  I also had closest possible views of Edinburgh Castle, as shown in the video below.  When it was time to leave, by the way, there was Dale MacPhee to see me off. AND NOW SEE THE ALEXANDER GRAHAM BELL SUITE