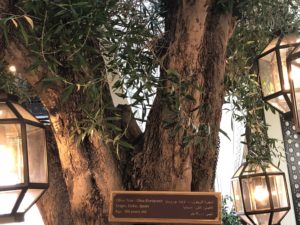 When Ritz-Carlton went into Ras al Khaimah it actually signed two luxury hotels, or rather two amazing tented camps.  As well as the beach-set property Ritz-Carlton Ras al Khaimah Al Hamra there is what is now Ritz-Carlton Ras al Khaimah Al Wadi, 20 minutes’ drive from the coast in the eternal dunes of Wadi Khajeja, a 500-hectare national park. Arrive, and you go into a covered lobby courtyard dominated by a 300-year old olive tree: the gal was told that the property’s owner, HH Sheikh Ahmed bin Saud bin Saqr Al Qasimi, specifically wanted a tree from Spain and this one, with its original soil and a horticultural ‘nanny’, was brought by ship through the Suez Canal, a three month voyage in al 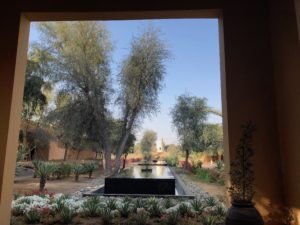 After passing by the olive tree, I went on through to the open approach, 24/7 gyms, sic, on my left, breakfast room on my right, and, 300 yards ahead beyond a long decorative pool, an Emirati tower on a hillock.  A buggy with a falcon’s face painted on the front took me to villa 515, which at 2,400 sq ft was considerably bigger than its counterpart down on the beach.  Put simply, this particular villa, one of 31 in this 101-total property, is like an extended figure-eight. Around the walls are no fewer than 31 blinds, only three of which are automatic (the others need pulling down at night, up in the morning). 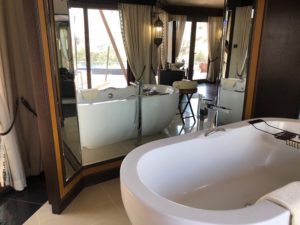 The bathtub occupies a central place.  Lie in it and look, thanks to cleverly-angled mirrors, around your entire space and out to the 40-feet heated pool, sunk into the sand. as shown n the picture above  In the morning gazelles flitted around the sand-dunes beyond.  I went down the five wood steps outside my front door and took one of my two pale blue city-bikes for a spin, to see The Farmhouse terrace restaurant, where I will dine next visit (last night was the final gala of the Arabian Hotel Investment Conference AHIC, hosted magnificently in the sand-dunes here, see the next Girlahead).  Next time, too, I try the Rainforest water experiences here, and have a massage. 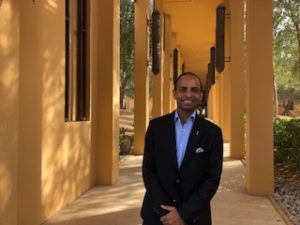 Amit Arora is GM of both properties and guests, like him, can shuttle between here and the beach-set Al Hamra property.  But stay here, up in the desert, and it is all-inclusive, apart from alcohol.  You do get all meals, and your choice of one activity a day.  Falconry is on that menu and I did meet the bird, a lovely tame female who appeared, despite a leather hood over her head, to be quite content with her life as one of the many attractions at this luxury tented-camp hotel. I must comment, by the way, on its space.  I am told it was almost full last night but I only saw half a dozen other guests the entire time (perhaps the tents are so addictive most just stay put). AND NOW SEE VIDEOS OF LUXURY TENT 515, AND A SECTION OF THE BREAKFAST BUFFET