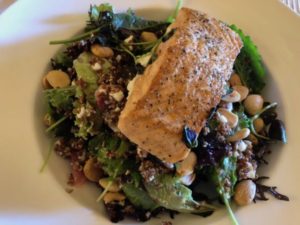 Ever been told that this is a five-star luxury hotel with a five-star spa and five-star food?  That is how the gal was greeted on arrival at Fairmont Grand Del Mar, in gorgeous rolling hills 20 miles north of San Diego.  The estate is magnificent: no wonder, ten years ago, that Manchester Financial Group built a rambling three-floor, 249-room Mediterranean-look villa here – it is now majority owned by Richard Blum, husband of Dianne Feinstein, and FHRI, who came in to manage, has a small share, too.  After days of meetings, getting here is literally a breath of fresh air.  Open the French windows of suite 355-6 and look out over the Tom Fazio golf course, above. Call private dining for a healthy salad and look what comes – a watercress and quinoa special, with local almonds, sheep’s milk feta and apple cider dressing. 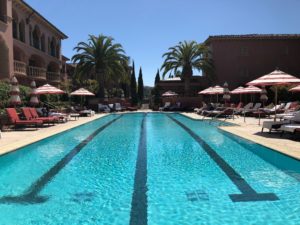 It was time to test the five-star wellness, overseen by the delightful and thoughtful Kyra Johnson Bradley – see her in a video, below.  The spa has 11 rooms, and six of the 35 technicians are ‘master therapists’.  I know. I had cricked something in my back sitting badly while writing earlier in the day and a Miss Austria applied extremely firm massage magic, 30 minutes flat.  Even more amazing, Kyra Johnson Bradley took me past the spa’s adult-only pool to a little villa with fresh lavender and my name waiting on its spa bed. She used a pencil wand to show immediately the amount of moisture in my skin – right cheek was nine percent better than left – and a mere 15 minutes (FIFTEEN) facial with divine unction from Dr Burgener in Lausanne plumped up both cheeks as effectively as pillows of the finest silk, from royal silk worms. Roughly 30% of all spa clients opt for anti-ageing, and in California, says Mrs Bradley, concern starts in their 20s. 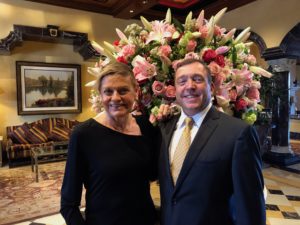 Dennis Clark, in his element

Now I was all set for dinner with Dennis Clark, who seems to revel in having swapped Mexico for southern California.  We were driven through immaculately manicured grounds up to Addison, named for Boca Raton architect Addison Mizner, on whom Manchester based the Grand Del Mar concept.  Here William Bradley, the other half of the spa genius, is in charge – and yes, there is a video of him too, below.  This is fine dining at its best, with tiny pots of Oscietra and chilled Compte de Champagne outside, watching the sun set, and then moving inside, to white table cloths, white Raynaud and formally dressed servers who move as ballet stars, three simultaneously pouring water into glasses at a table for three (synchronised swimming has nothing on this).  There will be lots of bubbles poured this coming weekend, by the way, to celebrate Mother’s Day, when mothers of little darlings are enticed with free golf. Dads get the same, by the way, on Father’s Day, June 17th, 2018. 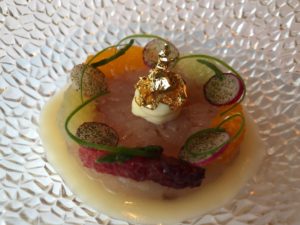 Addison is set meals only, four courses or more, as you want.  Our pre-ambles also included a chilled yoghurt soup, and tiny gougères filled with sherry.  I started with four small but plump Kumamoto oysters topped with pickled pear and Blanc de Blancs and went on to a plate of sake-cured Kampachi, yellow tail, with citrus, red radish, miso dressing.  My main course was a small tranche of beef with an escargot dijonnaise, mushroom gratin and, specially ordered, a bowl of vegetables, and the Pinot came from Morlet Family Vineyards Joli Coeur, Sonoma Coast, 2012. Five-star dining indeed – and, a few hours later, I look out at real stars giving way to Monet-like mist over Tom Fazio’s masterpiece.  One more star to this luxury hotel is warranted because the excellent gym is 24/7, and another for its room service, not only daytime but its early-morning breakfast, for which I had added the listed ‘anti-aging smoothie’, which was really the contents of my fruit basket, blueberries, raspberries and strawberries, with banana and Greek yoghurt.  So far then, a 17-star hotel, and I am still counting. NOW SEE VIDEOS OF MY SUITE, KYRA BRADLEY AND THE SPA, WILLIAM BRADLEY AND HIS KITCHEN, AND THE GORGEOUS MORNING MIST