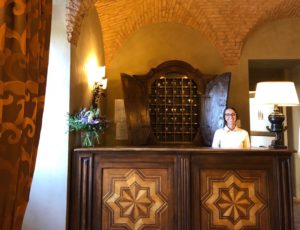 At the end of March 2019 Belmond unveiled its largest holding, 4,200 acres of typical Tuscan landscape 70 km due south of Florence. Think rolling hills and woodland, and hazy vistas and you have it. Judging by artefacts found during recent construction – the same priceless bits of pot now displayed in the breathtaking hilltop Belmond Castello di Casole, the 39-key hotel here – there have been people living on this site for millennia. Belmond bought the estate in 2018 and, with the help of designer J Banks and onsite Manager, Roberto Protezione, spent months bringing it up to scratch.  This involved immaculate manicuring of the immediate gardens and, inside, adding such significant antiques as the chest shown here, which opens up to be the reception closet. 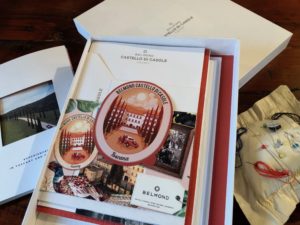 The hotel has in the near vicinity 30 timeshare houses, with another 15 to come – the lucky fractional owners can use all the hotel facilities, which include a scenic outside pool permanently heated to 27°C. The whole complex was put together a decade ago by a company called Timbers, based in Winter Park FL, and the interiors were done by Joni Vanderslice, working as J. Banks, a Hilton Head designer who has worked with Timbers’ founding Chairman, David Burder, before.  The hotel itself has evolved from what was formerly a small village. I was down a short pebbled street from the anchor three-floor ‘mansion’ in CP33 (CP stands for Casa del Prete and yes, this was where the priest lived.  Up 13 smooth-brick steps from the ‘street’, my home looked out to Tuscan infinity 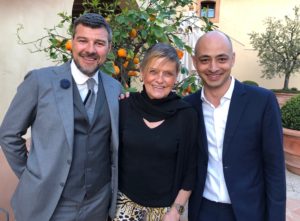 As the video below shows, I was reminded of the past and, at the same time, I had the trappings of today, including an espresso maker, electric towel rail and good WiFi.  I also loved such differentiators as a satin pincushion with threaded needles, and a box of goodies with postcards showing Maria Callas with Visconti, whose brother owned this place. An enticing booklet suggested a range of activities, from boar hunting through to ballooning, but sadly my time was limited (next time the Essere Spa is definitely on the list).  I hiked briskly down the near-diagonal approach road, for cardiac therapy, and watched Sky News on a Technogym elliptical (how nice to have a gym with a view, especially over Tuscan valleys). I was dining with Roberto Protezione and with big-local-boss Emanuele Manfroi, who is based at Belmond Villa San Michele. He oversees town, in the form of Belmond Villa San Michele which is actually in Fiesole but it does, admittedly, overlook Florence.  He also, he says with his characteristic wit, can offer country, which is Belmond Castello di Casole – talk to some of the 120 employees here and THIS is the perfect quality of life, they say. 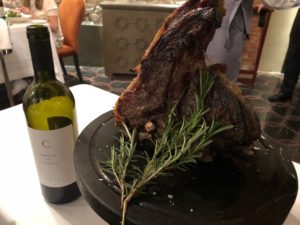 We dined in Tosca, which to my surprise was full, a mere six nights after the hotel opened: oh those lucky fractional owners, who have Daniele Sera’s food on their doorstep.  We paired the hotel’s own olive oil and wine, a 2016 Sangiovese, with our meal.  I started with a tight-knit ball of a dente spaghetti lightly infused with squid ink, and pride of place went to the bistecca all Fiorentina, shared with Emanuele Manfroi – this is a hefty loin cut, generally Chianina beef, and it must be hung at least 15 days.  Tonight it was presented upright, and effortlessly carved at table by a charming young lady who smiled throughout.  In the morning, after a good workout and a few minutes admiring the stunning array of high-fashion athleisure separates in the spa’s boutique, I had my usual healthy breakfast. I then, merely for a change of creative enviornment, used the luxury hotel’s main building’s lounge and bar as alternative work spots. Sadly, Eduoardo from Sienna was already ready with the black Jaguar to drive me one hour to the airport – who knows, next time I might be chauffeured in the electrically-modified 1936-vintage Fiat 1100 Musone that Emanuele is having decorated, inside and out, by Rome street artist Lucamaleonte. WANT TO SEE ROOM 33?