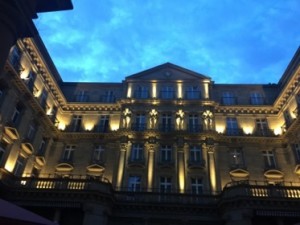 Looking up at the hotel’s gargoyles

It is always a delight to return to a luxury hotel that has history galore and yet is not only up to date but leading the way, and that is the case with Steigenberger Frankfurter Hof in Frankfurt. As you drive around from Kaiserstrasse to the main hotel entrance on Bethmannstrasse, you are struck, as always, by the glory of the hotel’s terrace, and the four giant gargoyles visible, behind, on the three top floors of the six-floor building. Last time here, the gal coincided with an industry event and the whole of the terrace was one big party. Today it is more sedate, although the age of those staying and visiting here does seem just a little younger on each sighting. 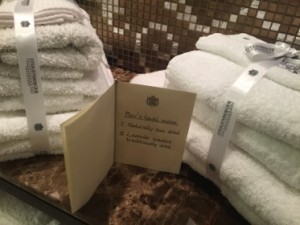 Different towels, and a personalised menu

The Royal Suite in this 303-room hotel was partly designed by Dora El Chiaty and she, undoubtedly, chose the lovely floral paintings, and knicknacks that include crystal vases and clocks set in lumps of rock. Someone decided on the Gerlofer light-and-sound shower that was emitting bird songs nonstop when I arrived – it was rather soothing, actually. Someone, also, had cunningly given me a towel menu, an absolute first in the history of hotel keeping. There were fluffy towels, and air-dried towels and marvellous lavender-scented really scratchy towels, much easier than using a special exfoliating mitt! They also dried, really properly. 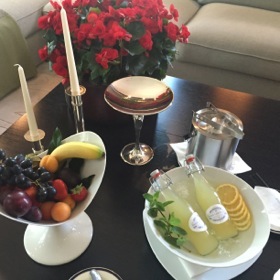 But the GM here, Moritz Klein, picks up on things that are different. The welcome included hotel-made lemonade, from a recipe used for four decades or more by one of the bartenders. At breakfast, surrounded by top ECB bankers and other Figures From Finance, I loved having a complimentary berry smoothie – just the starter that would get Mario Draghi’s adrenalin going while he tries to work out what to do with Europe’s dire finances. Two Japanese honeymooners were taking selfies, obviously besotted by the skilled servers gliding between the breakfast tables with silver pots of coffee. Everyone working here looks as if they have come from the pages of a great history of restaurant staff, chic black and white bistro uniforms, not a hair out of place – a complete contrast to the public streets outside where casual and kitsch is the name of the game. 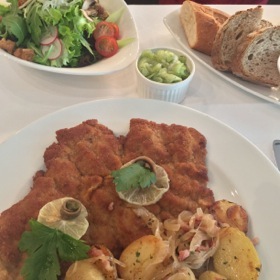 I wanted to remind myself of the history of this place, originally built in 1876 for the owner of the Frankfurter Zeitung, Leopold Sonnemann, and 85% destroyed by bombing on March 22nd, 1944 – Alfred Steigenberger, who had long owned it by then, was first on the scene and determined to rebuild it entirely, gargoyles and all. I read the history of this luxury hotel in an Andreas Augustin book in my room. Always wanting to multi-task, I ate a fabulous, traditional wienerschnitzel, with bacon-studded potatoes and a side cucumber salad, at the same time. After all I was, I knew, going to be highly modern this evening…