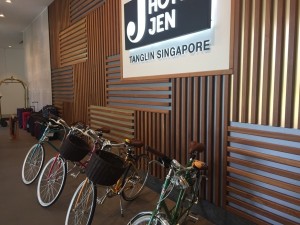 We all know people who have had facelifts – mostly they work, but just occasionally they do not and the poor recipient becomes expressionless. It is like that with luxury hotels. Sometimes renovations remove character. In the case of what is now Hotel Jen Tanglin Singapore, the transformation has been more than an unqualified success (of course the gal was impressed as soon as she saw the Tokyo City Bikes lined up outside the main entrance on Cuscaden Road, immediately behind Regent Singapore). This was formerly Traders Singapore, a road warrior‘s simplification of what its bigger and more glamorous sister, Shangri-La Singapore, offered. Now it is no dumbed down version of anything. Hotel Jen, overseen by brand supervisor Lothar Nessmann, is a character in its own right. 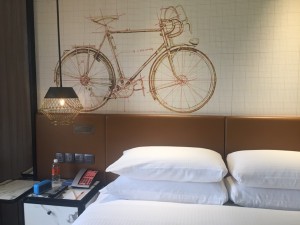 One of the four headboard-wall designs shows a bike

The designer of the new-look 565-room hotel is Norman Chan, of Hong Kong-based BTR Studio – an interesting guy, once to be a doctor but he got diverted. He is known for clean-cut private residences, including those in Opus, Frank Gehry‘s first Hong Kong building. Here he has been clean-cut and humorous. By the elevators on the ground floor is a plain cream wall on to which are stuck real bicycles, cycling ‘up’. They are fixed so tightly that people standing can hold the handlebars, be photographed, turn the image through 90 degrees and, hey presto, it looks as if you are ‘cycling‘. Bicycles also appear, by the way, as one of four headboard wall designs, as shown. I particularly love the 12 suites, which all have bright Smeg refrigerators, and bright alarm clocks, and bright Nespresso machines. Most favoured selfie spot, apparently, is perched on a Smeg holding a cushion that says ‘I’m at Jen’. 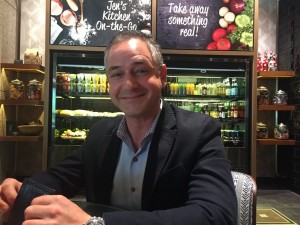 Clifford Weiner in the 24/7 deli

Yes, this place is fun, for all ages. The GM, Clifford Weiner, arrived two years before full metamorphosis and immediately replaced staff uniforms. Throw away cheong-sams and bring in street gear by local young designers.   Next came a re-do of the staff dining room. The name of the hotel changed, and Norman Chan began his magic. The front lobby has a 24/7 – one of its communal tables is held up by a base that is a delivery bicycle. The lobby is full of lounging areas, both in front of a living-wall screen and behind it, where the rear space becomes the all-day restaurant. Here things needed changing too, said Clifford Weiner, a long-time food man who worked at such eminent hotels as Badrutt’s Palace, St Moritz; InterContinental London Park Lane, and Atlantis The Palm, Dubai. He needed to replace the restaurant’s rather boring buffet with something healthier, and more exciting. 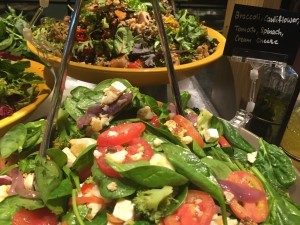 Now he has filled buffets with lots of really enticing salads – one of his heroes is Yotam Ottolenghi, the journalist and critic who also runs restaurants and writes (his books include Ottolenghi: The Cookbook, and Plenty). Clifford Weiner is thus attracting local wellness addicts, as well as fashionistas. He hosts fashion shows in the restaurant, with models and clothes from the many local boutiques, who in turn invite their regular customers. He also courts other diners, with live demonstrations from cocktail mixologists, and wine makers. This is certainly a fun luxury hotel, on top of which it claims to have the fastest WiFi in town, everywhere, inside and out.