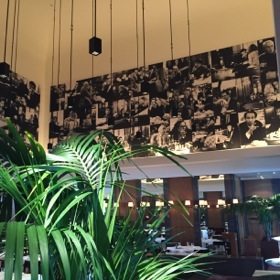 Girandole has a café frieze around its upper walls

When Shinjuku‘s most famous luxury hotel, Park Hyatt Tokyo, opened 1994 it was if anything far ahead of its time, says the gal. John Morford‘s designs were, however, so timeless that little has had to be changed. The all-day Girandole restaurant – note the greenery – still has its upper frieze, a photo montage of 144 café pictures taken in Florence, Paris, Rome and Venice by Berliner Vera Mercer. Interestingly, at eight the few breakfasters sit at the far end of the 41st floor room, looking out over neighbouring skyline. By nine, when I am about to leave, there are three times as many breakfasters and they prefer the inner part of the room, almost as if they want to be seen. 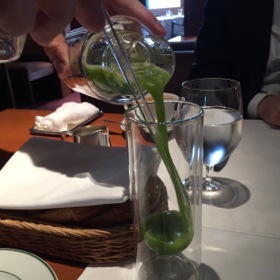 My green smoothie is poured

Still on the greenery tack, there is a healthy smoothie, to help the immune system. Frankly I am not sure that drinking apple, celery, cucumber, ginger, papaya and spinach is going to make any difference but it is worth trying it: healthy balance items also include an apple and carrot smoothie, with orange juice and soya milk, and Hokkaido ricotta, which must be super. I can look through to the library leading off Girandole, which has a display of bookplates by famous artists. This is a hotel that wants you to be cultured. You are shown how to download any newspaper, but also the Financial Times is around by at least seven. 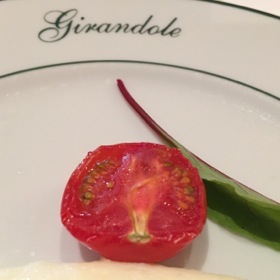 Even the china has green rim designs

Dishes in Girandole come on green-edged Bernardaud porcelain, which does just add another hint of green. I am running out of green superlatives, but there are enough superlatives anyway in this hotel. As well as the main hotel library, room 4808, the Diplomatic Suite, has a private library of 600 books, while the Presidential Suite has a mere 500 books, but with a view of Mount Fuji you would not have time to read more than one percent in a hotel where average length of stay is not much more than a couple of nights. Actually my room, 4801, is so comfortable I barely have time to glance at my books (about 30 in all): I love the way the corridor wall behind the bed is a zigzag, almost origami, of rare water elm long submerged in Hokkaido water. 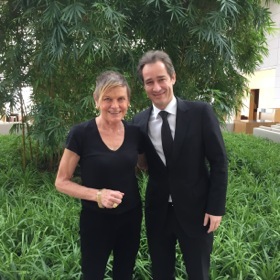 Finally, a green departure. In the morning the light streams into the luxury hotel’s 41st floor glass-pyramid open atrium. GM Philippe Roux-Dessarps is there to say goodbye, and I head away. Bye bye greenery…