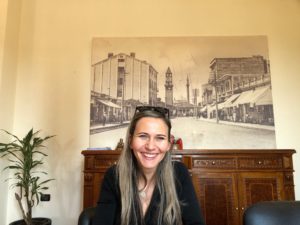 The gal obviously wanted to find out what makes Albania, and its capital, tick. The best spokespeople for this city-of-two million are its determined Mayor, Erion Veliaj, 37, and his equally-charismatic Chief of Staff, Anuela Ristani, who aborted her Fulbright scholarship marketing PhD in the USA to come back home to support the effort.  Tirana is determined to get into the EU by 2025, and it also wants to be considered as one of Europe’s megacities, now. This means it needs international investment, also now, to revive railways and other infrastructure, and attract luxury hotel brands. There is, says Anuela Ristani, land available, her office can help with connections, and long-term tax incentives are available. 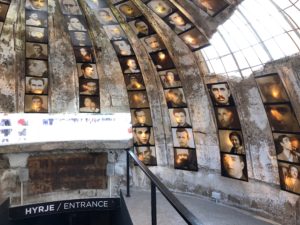 The municipality office, by the way, is just one of Tirana’s dozens of fascinating buildings, some centuries old, others bang up to 2018 with architecture, and colours, that make you say wow (a display in the MAKtirana lobby shows how design company Triqita produces covetable ties and scarves based on some of the modern architecture).  The municipality building’s central stairwell, above, has striking roof-hung lanterns, has murals based on past rural scenes, and costumes like the skirted garb that some associate with portraits of Lord Byron. 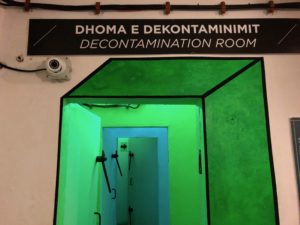 But the past, the days when Albania was considered the North Korea of Europe, must not be overlooked.  Communist Head of State Enver Hoxha, 1908-1985 built over 173,000 crisis bunkers across the country in the period 1960s until his death.  Some were underground, some above-ground, some only held two people while others were considerably more spacious.  Two of the surviving bunkers in central Tirana have been educationalised as Bunk’Art, and Bunk’Art 2, two minutes’ from the municipality building, is particularly poignant.  At the above-ground entrance, the rabbit-warren that was originally built for the Ministry of Interior Affairs was opened in 2016 as a memorial to the 100,00 or so who, it is estimated, lost their lives during Hoxha’s rule. In one room down there is a life-size photo of someone hanging. Another room has fluttering sheets suspended from the low ceiling listing over 5,000 names. 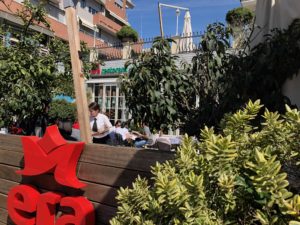 Lunch – outside in baking Spring sunshine

Today, the sun is shining. Let us think present and future. Albania is, says my new friend Mike Walker – an Englishman married to an Albanian – the next Riviera.  Over a typical Albanian lunch of Greek-type salad and meatballs in tomato sauce, he raved about the country’s potential. Already there is great nightlife and dining (a Noma alumnus, Bleder Kola, runs Mullixhiu). A second airport, in the south of Albania at Vlorawere, is planned to complement the existing and out-of-capacity Tirana airport. This is Chinese owned and it has absolutely the best Business lounge anywhere (where else do you see so much living greenery, including a mature olive tree atop the service counter?).  This autumn Mike Walker opens what will be Tirana’s only global-brand hotel, Hilton Garden Inn, with a 24/7 Technogym and two big ballrooms to hold two meetings or parties simultaneously: this is important as Albanians like nothing better than celebrating, and this includes five-year birthday as well as new decades. Talking of five, by the way, Mike Walker predicts that by 2023 there will be at least a handful of real luxury hotels here in Tirana. AND NOW, FOR THREE PERSPECTIVES OF TIRANA, SEE VIDEOS TAKEN ON THE STREET, IN BUNK’ART, AND THEN, ON DEPARTURE, IN THE STUNNING BUSINESS LOUNGE AT TIRANA AIRPORT