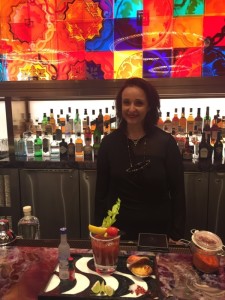 Every St Regis luxury hotel worldwide has its version of the Bloody Mary, a feature now so well-known that St Regis brand manager Jim Petrus was given nearly half a page in the Wall Street Journal last week to talk about the original St Regis New York model, and the Siam Mary version at St Regis Bangkok. At the two month-old St Regis Macao, Cotai Central, says the gal, the barman made a Mario do Leste Bloody Mary (see the video below), and presented it to Janet McNab on a tray with black and white swirls reminiscent of the markings on quays in old Portuguese colonial sea ports. Now Australia‘s top hotel ladies – of the calibre, say, of Jennifer Fox, Marlene Poynder and Sonja Vodusek, are not fazed by anything, and Janet McNab fits that mould. 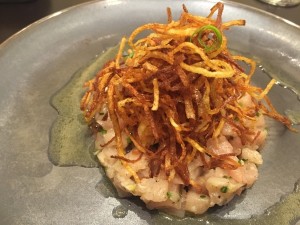 Here, in Macau, she oversees the adjacent 4,000-room – yes that is right – Sheraton Macao, Cotai Central as well as this 400 room hotel. The two properties share finance, distribution and a few other functions, and both hotels are connected, by an underground area big enough to need bicycles, to Sands Cotai Central’s Conrad, Holiday Inn and Venetian, with more siblings to come – all these share purchasing and stores, dining for the thousands of team members, and a highly automated uniform store that would make Amazon’s Jeff Bezos open his eyes in admiration. Interestingly, St Regis only has one eating place, The Manor, and very agreeable it is too. 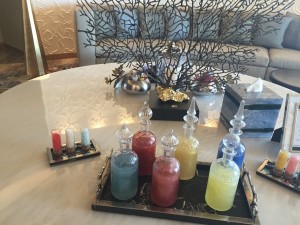 Designed by Wilson, The Manor is cleverly divided into adjacent rooms, all light and bright. One is loosely themed as a library, one as the kitchen. I am not sure which we dined in but it was very relaxing. Oscar the major-domo brought over the dispenser, what the Japanese and Vietnamese used to use as coffee drips, as shown above, today offering a non-sweetened palate cleanser, of ginger and citrus. He recommended a hamachi tartare topped with string-thin potato sticks, and a divine mustard sorbet hidden in the middle. China is Bernardaud, cutlery is Christofle – this is St Regis, remember. The Iridium spa, on the 38th floor, works with Remède, and a selection of jewel-based massage oils, including good luck aquamarine and majestic sapphire. 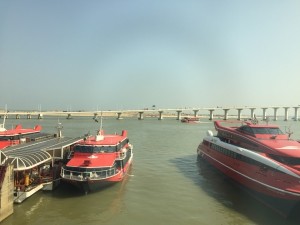 Ready to leave Macau, for now

Talking of colours, whereas in the arrivals reception area designer Etienne Moyat seems to stress masculinity, and darkish wood, in bedrooms he is lighter, brighter and uplifting – and stunning  minibar cabinets have interiors that are bright turquoise, or lavender. A black people-carrier awaited. I left this new and stylish luxury hotel, and was taken to the TurboJet marine point for a red ferry to multi-colour Hong Kong.