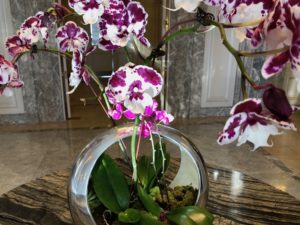 The gal moved half way up Nob Hill to Ritz-Carlton San Francisco, which is even more luxurious than ever – HBA’s designs, in contemporary-21st century style, have made Frank Nicholson’s earlier ideas distant memories to those guests who have been coming here since Hervé Humler, as GM, opened the 336-room hotel in 1991.  Amazingly, 18 of the 400-strong work force have, says GM Rick Corcoran, been here all that time.  Wow, what changes they have seen – though perhaps flowers, like those on the left, go on for ever. One of the innovations since my last visit is the JCB boutique, above: a cubby-hole leading off the main lobby is a Jean-Claude Boisset tasting room. 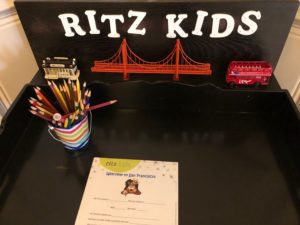 Other hotels put in special reception desks for kids but this hotel’s is particularly cute, and I did see lots of toddlers, and their slightly-elder siblings, actually sitting at this desk, or at least trying to destroy it. Somehow this hotel is able simultaneously to accommodate yummy mummies showing off their offspring as well as the mature high society of San Francisco.  Locals come for special events, and perhaps just to have afternoon tea in the glorious lobby lounge – somewhat intriguingly, early morning the integral bar, to the left as you go into the lounge, has ceiling-high mirrors overhead but later in the day these reveal two television screens, one, it seems, always showing sport. 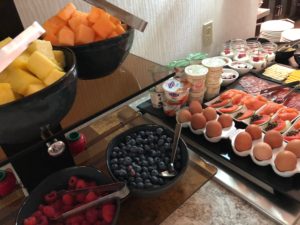 The eighth floor Club lounge was always trend-setting, even in the last century.  Now, run continuously by chic women, and men in cornflower and white striped ties, it has a much bigger array of offerings. The Oenotech dispenser, for instance, has four different labels – I was particularly impressed by the Talbott Kali Hari 2016 Pinot Noir.  Breakfast similarly has a wide range of offerings. Some innovations are suggested by team members – Rick Corcoran says he has never had such a dedicated and passionate work force.  He too has now become a fully-fledged addict of the Ritz-Carlton creed, adhering to the little fold-out book of beliefs that all team members carry. 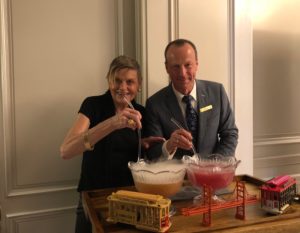 It was a team suggestion, says Rick Corcoran, that led to the nightly complimentary San Francisco ‘fog’ cocktail.  Every day at 5.25 p.m. precisely a cart decorated with San Francisco logos is wheeled into the main lobby.  It also has two bowls of dry-ice cocktails, one a rum punch and, that night, the other a no-alcohol cranberry juice.  For ten minutes precisely anyone who is passing is offered a glass of whichever they prefer.  This will be taken further, he says: a sizeable model of the Golden Gate Bridge – he indicated about six feet high – will somehow be part of this offering. There is certainly always something going on at this luxury hotel halfway-up-the-hill. What else will appear? WANT TO SEE SUITE 838?