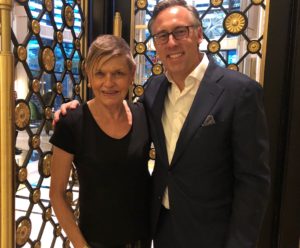 The gal is often asked ‘which is the best hotel in the world?’. Impossible to answer. Almost as difficult is the question: ‘which is the most beautiful hotel in the world?’ but at least one contender would be Four Seasons Hotel Jakarta Capital Place. From top to bottom, the luxury of space and attention to detail make the entire 20-floor building a thing of beauty – one of the first things GM Christian Poda wanted to do on arrival, by a mile-long private road (built by the hotel’s owner, to avoid Jakarta’s correctly-notorious traffice) at this luxury hotel was to show it, the hotel, off.  The exterior is a steel and glass rectangular sculpture-shape by Cesar Pelli. Bill Bensley landscaping includes his signature animal sculptures amid ballet-like trees around the fifth floor outside pool, and all interiors are Alexandra Champalimaud, star of all YTL hotels, the re-done Raffles Singapore and so many more. 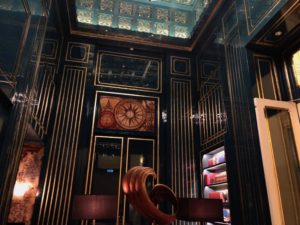 Look up at the library ceiling…

Her talent include an almost unmatched eye for colour.  All 125 units here are suites, from 630 sq ft up: see a video below to tour suite 1609’s subtle silver-grey palette, which includes full-height panels of modern chinoiserie, delicate chrysanthemums on a shiny silver background.  In public areas, however, she has gone for a riot of colour, plus height and light. The lobby’s ceiling is 38 ft high, with Lasvit chandeliers, from Prague. A grand staircase, leading down from meeting rooms, has 27 wide stairs covered in beige carpeting with occasional gentian flowers (high over, a moulded cream cornice features Indonesian spices, in relief). Several rooms lead off the lobby, which is itself seating-free. A library, open 24/7 for residents, has comfy seating, and hardbacks include Dictionary of Clinical Cardiology standing next to a tome on Cartography: look up, and the ceiling here is malachite, with criss-crosses of gold leaf. 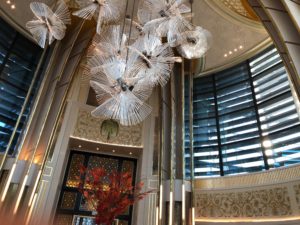 .. and in the Palm Court

The library is flanked by a nook of a bar, and by the aptly named Palm Court, with a hemispherical ceiling which soars to 45 feet – seating here is bottle green, and includes porters’ chairs with hoodie-type backs. Go out from Palm Court, which is all-day dining, to its tiled courtyard garden (Bill Bensley), with towering palms and a glassed-in conservatory called Orchid Court, because that is what it is filled with.  Bill Bensley also designed some outré chairs for the outside terrace to the 20th floor Alto restaurant, where the interior has deep persimmon walls.  Yes, I was told, this is the best Italian food in town. Christian Poda and I both had his favourite dish, Straccetti al Porcini – freeform pasta with porcini, and oodles of truffle parmigiano cream (his preferred accompanying wine, Tignanello 2012, was a perfect match). 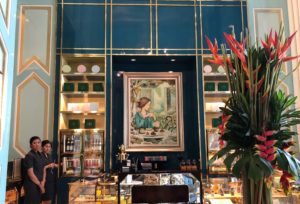 The chef, Marco Riva, was everywhere in this thoughtfully attentive luxury hotel. He was there at dinner, and at breakfast down in Palm Court, supervising the first appearance of a buffet that, today, successful evolved from one long table to several different venues.  No, he did not bring my room service lunch trolley, though I am sure he personally prepared the caprese of soft cheeses and green, and red, tomatoes – and was it he who had suggested sending up rosemary flavoured iced tea?  He was certainly there, by the lobby’s tea salon, when I later checked out.  Oh that salon, another venue of exquisite beauty, with mustard chairs in front of displays of cake boxes in soft gelato colours, pistachio and rose. High above is yet another crystal chandelier, and as I walked out I noticed a bough-shaped chocolate confection on which playing cards are affixed. This is an absolutely gorgeous hotel, with endless touch points, many of them whimsical. NOW WE HAVE THE LOBBY, THE ORCHID COURT, AND SUITE 1609