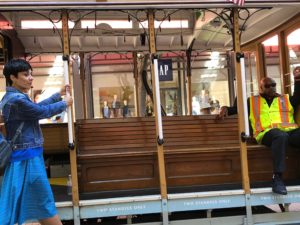 The gal could, with a bit of imagination, say she arrived at the super well thought-out InterContinental San Francisco by cable car.  From Fisherman’s Wharf that is the best way, certainly, of getting south, almost to Market, and then the 33-floor steel sculpture of a hotel, immediately to the west of Moscone Center West, is a six minutes’ walk.  This is an extremely clever and up to the minute hotel, 2010-vintage but already given a needed refreshment as it is so busy, and not only at convention times. One of the 2018-vintage enhancements, for instance, is getting rid of what was a ten-room spa to make eight more bedrooms, making a total of 558 rooms.  All the renovations are carefully described in sheets of paper in a neat pile by the concierge corner. 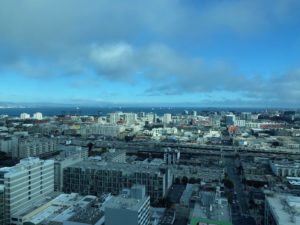 I was lucky enough to be in 3009, one of each floor’s corner suites, with a salon that has 270-degree windows looking out over San Francisco Bay as well as Potrero Hill. Refreshed by original designers Brayton+Hughes, the new look includes dark-tan parquet and some muted teal flooring, and light stone coloured walls and drapes: being a business hotel which turns to leisure at weekends, it has the really good WiFi that both sectors expect, and a serious Precor gym, 24/7 that East Coasters and I appreciate. It is a realistic hotel, as evidenced by the fill-your-own bottle with water, in the gym, and the space provided for your own things, say medicines, in the automatic Minibar. The espresso is a simple-work Illy.  GM Peter Koehler, who came from Campton Place as well as Kempinski, has, since opening, made sure that this hotel also has the kind of Club Lounge that are a feature of all the best InterContinentals – I love the way that cocktail hour includes displays of spirits, as above, as well as icebuckets full of Gloria Ferrer sparkling and several California white wines, and also a stack of such bottles as Anchor Steam Beer, brewed in San Francisco since 1896. 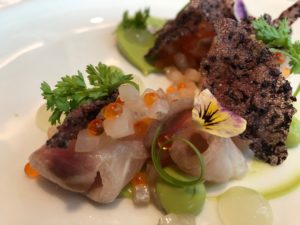 Unusually, this hotel has an all-day restaurant, LUCE, that has had a Michelin star consistently since 2009. It has a street entrance, it is light and bright, with a side wall of stored wine bottles, stacked horizontally so you can just see through to the kitchen: space dividers include an airy ‘wall’ of white orchids in tall glass vases. Tables are set with crisp white linens, and white Villeroy & Boch china and Hepp cutlery. Servers, all in black, bistro style, are absolutely charming.  About 35% of diners, apparently, choose chef Daniel Corey’s tasting menu, $115 for ten courses, with an option of an additional three cheeses (for $15), and wine pairings (for $65). While we chose our à la carte, a server brought a tray of superb breads, from Acme Bread Company in Berkeley – wow, I remember this brand, started by Steve Sullivan and now turning over $14.5 million a year.  Their sourdough with olives is so good I could have been tempted to forgo any other food… 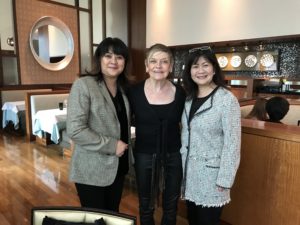 But of course Corey’s suggestions triumphed.  After an amuse formed around Greek yoghurt foam, I went on to Pacific amberjack lightly marinated in yuzu, with trout roe, avocado and forbidden rice. Look at the presentation – beautiful.  Similarly, my New York strip, roasted with rosemary and garlic, Yukon potato ‘Anna’, trumpet royale, date marmalade, looked and tasted good. The entire meal was a delightful experience – no wonder the place was full. I checked it again at breakfast, where the buffet in front of the wine wall encourages you to come back: I actually breakfasted up in the sixth floor club lounge, where the buffet, though smaller, is great for health watchers, with ample supplies of berries and whole fruits, and US traditionalists can have gravadlax galore on their choice of bagel. Good marks, too, for supplies of the Financial Times as well as the New York Times, and local papers.  And I must end with a conversation I had over dinner with Jen Dunn, area head of corporate sales, and her colleague on the creative-PR side, Connie Perez.  This hotel, uniquely in my experience, gives discounts on room rates: 2% for reusing towels/linen, 2% more for showing a used public transport stub, 3% more for using the econoMODE thermostat button to reduce energy consumption and yet another 3% for walking 10,000 steps a day, measured with a complimentary pedometer.  On average 21 guests a month achieve that 10% saving.  See why this is such a clever hotel! NOW TAKE A CABLE CAR RIDE, AND THEN TOUR SUITE 3006