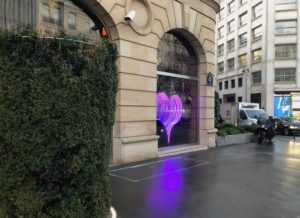 Well, says the gal, this was a week that was – amazing, educational, a revelation, or what?  Actually all of these apply.  Take Fouquet’s Barrière Hotel & Restaurants Paris, a luxury hotel that evolved from a café at the junction of Champs Elysées and avenue George V. To start with a bit of history, hackney carriages used to stop here, at Le Criterion, as it then was, enroute to Longchamp horse-racing. In 1899 Louis Fouquet bought the site, and in 1903 opened what was called Criterion-Fouquet’s Bar. Jump forward a century to 1999, when Groupe Lucien Barrière, led by then-chairman Diane Barrière-Desseigne, bought Fouquet’s, but she wanted to expand the café to a hotel, so they bought the adjacent six buildings to give them the entire block. The hotel opened,  with 101 rooms,  in 2006. 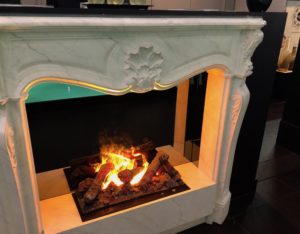 There is a spa, which has a two-way working fire as its reception desk: you have an indoor pool, and a LifeFitness gym, all of which open at 7 a.m., but thanks to the extremely thoughtful GM Geraldine Dobey, I was somehow able to start working out slightly before that.  This is, by the way,  a soft-lilt Irishwoman who is universally admired by all her competitors in the Paris luxury property category. See her, above, standing in a ground-floor gallery of photos of former guests, and members of Barrière family. The gallery is part of Marta, the public areas that have recently been themed, in honour of Lucien Barrière’s wife, and Diane’s mother: Marta is a joint venture between the Group and highly-respected events company Moma Group, which provides the kind of music and ambience that brings locals in to the hotel.  They have always come. In the past their numbers included Marlene Dietrich, François Truffaut, Jean-Luc Godard, Edith Piaf, Charles Aznavour, and today you might run into Jodie Foster, Sean Penn orQuentin Tarantino. You might also overlap with some of the 700 influencers – in the real sense of the word – who are members of Maxim’s Business Club, generally known as MBC, which is based here (the club, which also has a Geneva branch, was established in 1968 by the Polish Prince Jean Poniatowski, one-time Editor of Vogue and Télé 7 Jours, and Accor founder Paul Dupuy). 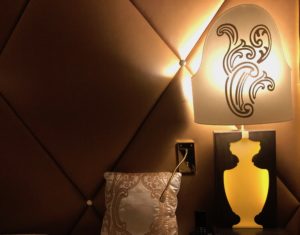 Less-royal guests continue to flock to this hotel: Americans top the market, followed by French, and the Middle East, and overall average stay is three nights. Many come for history, and location. Others are attracted by typical Jacques Garcia design, lots of plush velvet, outrageously outsized sofas, dark colours, currently highlighted by stunning electric pop art by Emmanuelle Rybojad. I was really impressed by Jacques Garcia’s bedroom design.  This Frenchman always seemed to exude funereal undertones – think Hotel Costes, here in Paris, and the Selman, in Marrakech (there is enough depression in the world anyway so why accentuate it?) What he is doing here in refurbishing bedrooms is, by contrast, truly elevating.  I love his softest champagne satin curtains embroidered with gold, his unique bedside lights, and his practicality – everything in room 405, see the video below, was easy to find and operate and, as part of the hotel’s extensive sustainability programme, linens are organic. 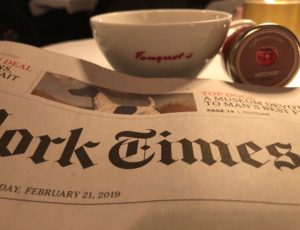 A lot impressed me at this Champs Elysées luxury hotel. Fouquet’s, the café, will soon see its sibling, Le Joy restaurant, re-opening on the second floor, and you can also eat simply in the Moma Group-run bar. All the concierges offer other dining ideas (and sightseeing suggestions) on both sides of an A4 sheet in my room. The staff here, thanks to Geraldine Dobey, seem to love what they do – my list here includes Marian, who works every night because she loves it. And, after superb coffee and a quick breakfast, off Vavró-designed Fouquet’s china, I was just about to leave when I was brought an A4 envelope with my name on it.  Inside, topped and tailed, was a hand-written message from one of the 330 staff members whom, I swear, I had not met:

‘Good morning!  A morning is a wonderful blessing, either cloudy or sunny. It stands for a hope, giving us another start of what we call ‘life’. Have a good morning and Parisian day!’, signed ‘ Duty Manager Fabio Carneiro’.