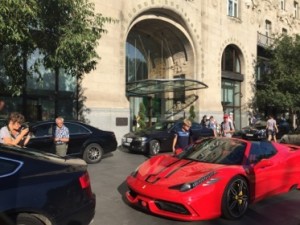 Was this Sebastian Vettel’s day-car outside the hotel?

From one Four Seasons luxury hotel to another, from Paris to Budapest, and no, the gal did not go by Ferrari. It was Hungary’s Grand Prix last Sunday, July 26th 2015, and the teams seemed to be staying in one of two of the beautiful city’s hostelries. No names mentioned, of course. But having several of these scarlet beauties outside Four Seasons Gresham Palace certainly attracted a lot of attention, especially since Ferrari’s Sebastian Vettel won the race. The hotel anyway is a magnet for the cultured among hordes of travellers flocking to Budapest every summer – amazingly, about 45 river cruise boats visit every day (sic) during the April to October season (with about 72 cabins each, that is one big lot of people, and Viking is apparently adding even more boats in 2016). 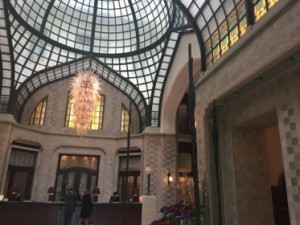 Some lucky ones come into the 179-room hotel’s glorious lobby to gaze in awe at its lobby, evoking memories of the Gresham Palace first designed by English architect William Tierney in 1839: it was rebuilt in 1906 by Gresham Life Assurance (local architect Sigmund Quittner), was blown up variously in both World Wars, and was briefly headquarters of the Red Army. The first time I saw it, prior to its 2004 opening as a hotel, it was still an empty shell, with rocket holes. Now it is a haven of calm. Its lofty upper corridors have all-wood doors, in Art Nouveau style, and bedrooms (designer Fiona Thompson/Richmond International), similarly high-ceilinged, have pale pink stencils as cornices, and white leather headboards. 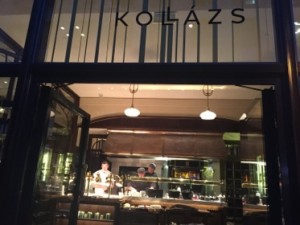 Looking into Kollázs, from Zrínyi utca

The Omani owners, in association with hotel GM Yves Giacometti, made a bold decision. The 2004-vintage fine dining restaurant was a victim of the 2008 financial crisis and the café was not attracting locals. With the help of San Francisco-based designers EDG they replaced ground floor meeting rooms by a spectacular multi-room Kollázs bistro-bar, with a prominent street entrance off Zrínyi utca (the hotel’s main entrance is just round the corner on Széchenyi Istvan Terr). Look into Kollazs from Zrinyi utca and you see the main grill cooking area, with Josper Grill. Further in, left and right, you see a succession of small rooms and a marvellous circular bar, and even on a rainy night nearly every one of the 220 seats is taken, mostly by locals. 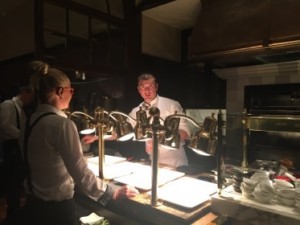 Staff buzz around – they wear stunning uniforms (hostesses in deep teal jump suits, designed by Yves Giacometti and his gorgeous head of communications Fanni Bakos, just returned from wowing Paris when she worked for Dior and then Assouline, in its Place Vendôme office above Bouchard). One server has sexy red eyeglasses, matching the dominant colour in some of the pop-up art works on the restaurant’s wood walls, put there on a two-month rotation by ART MARKET Budapest . I am offered a cocktail, designed by Mancunian Jamie Jones – how about a Last Wish, namely Türó-infused Beefeater, with yellow Chartreuse, Maraschino, vanilla and clove syrup, and fresh lemon? Sorry, could the sommelier – Hungary’s best, Matyás Szik – suggest a wine? He pours first a Vylyan Villányi Kékfrankos 2013, and then the penultimate bottle of Kollázs Grand Opening 24 June 2015, a Cabernet from Figula specially bottled for the restaurant’s opening. 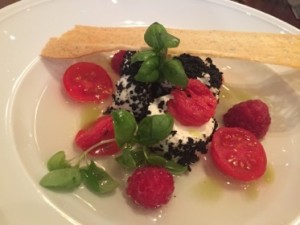 Three hundred people came that night, explains Fanni Bakos, who brought in influencers and socialites, and some of Budapest‘s burgeoning movie makers, plus hotel regulars. They drank the Figula wine, and Veuve Clicquot, and were offered tastings of chef Arpád Györffy’s food, say his version of caprese, and salade niçoise with tuna tataki, and a selection of grills. The menu is deliberately easy-read, served with style, on Bernardaud plates on plain wood tables. As always in Hungary, there is a mouth-watering selection of strudel and other pastries in the deli section as we go out, straight into the hotel’s lobby. Yes, they love their sweet things in this country. The hotel’s afternoon tea, named for the exquisite Herend porcelain used, includes rigó jancsi, chocolate cake, and plum-filled strudel. 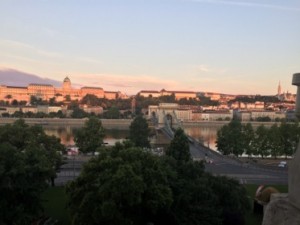 Bliss is any luxury hotel which, like this, has an imposing staircase to burn off dinner calories. I climb up 146 stone steps around an oval well, with Art Deco banisters, up to room 430 (I would then have to succumb to an elevator to rise to the top, fifth, floor wellness area, with a compact indoor pool and a lovely friendly gym). In the morning, I make a cup of Caffé Molinari espresso and stand out on my narrow balustrade, looking across at the early morning sun lighting up windows of Buda Castle, across the Danube in hilltop Buda. The Chain Bridge, which straddles the two banks of the river at this point, will be the firing point for fireworks on August 20th, St Stephen’s Day.