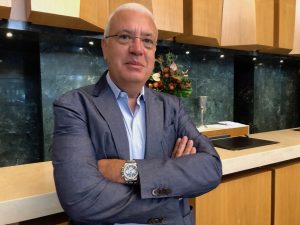 Well, after that glorious week of luxury hospitality, and archaeological education, afloat on Ponant’s Le Lyrial, the ship docked on-the-dot, 7 a.m. in Piraeus. And there, as planned, was a driver from the Divanis Collection, who drove the gal straight to Divani Caravel, a really friendly and empathetic luxury hotel (it is Leading as well as, like all the Divani Collection hotels, a member of Global Hotel Alliance GHA). Divanis is a family. The boss today, Spiros Divanis, is son of the founder: his wife, who heads interior decoration, had recently re-done suite 625 – see the video below – and their daughter is in operations. A niece handles sales and marketing. 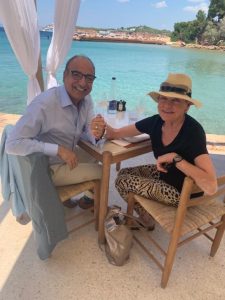 There is a highly popular outdoor pool on the 471-room hotel’s eighth floor rooftop but sadly I had no time for that. I was off to see the wizard, one of the wonderful wizards of Four Seasons. Last time I saw Bob Suri he was working his magic at well-established Four Seasons Dubai Jumeirah Bay: a few weeks ago a single telephone call saw him transported here, to Athens, temporarily to hold the fort at Four Seasons Astir Palace Hotel Athens in Vouliagmeni.  The Four Seasons flag finally went up March 2019 after a long wait. For years there had been discussion about who would take this 1958-vintage resort, owned by Starwood from 2006 to 2014. Well, the property is now owned by a London-based trio of new-generation investors who are resuscitating a beauty that in its heyday welcomed everybody from Bardot to Mandela, Jackie O to Sean Connery. 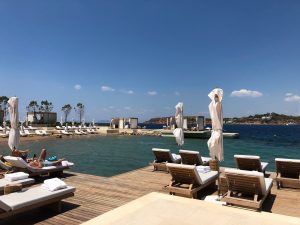 One of many waterside views, Four Seasons

Today, with two separate buildings, Four Seasons Astir Palace Hotel Athens offers space, bedrooms with glass walled bathrooms and enormous terraces (designer is Meyer Davis) and water facilities that are up to anything on the Riviera. And food is super – I was only there for lunch, outdoor at Taverna 37, under a necessary and cooling awning, see above. Our mezze tray to start was memorable: next time, perhaps a cooking lesson in the versatile Living Room.  Bob Suri showed me around as much as the clock permitted, and being him, of course he greeted all of the 650 employees we passed along the way. My Albanian driver back to town, by the way, was formerly a horse trainer. 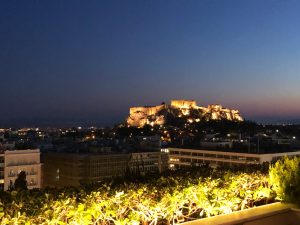 One of the world’s best-ever dinner views, from the GB rooftop

My day finished dining with another extraordinary hotelier, Tim Ananiadis, at the Grande Bretagne (he also oversees the King George Hotel next door). Even going in through the GB’s main door is a treat. Everything is so spic and span and there are surprises everywhere.  Turn right to where the GB Corner café used to be to find what is now a first-class concept-store boutique, full of things you really want to buy, like natural-fabric clothes from the islands at Mareva Grabowski’s Zeus+Dione stand – if you do not have time to buy, now, there is a dedicated Zeus+Dione store airside at the airport.  A concierge kindly printed my boarding pass and I was escorted to the elevators up to the eighth floor rooftop.  Of course it was fully booked, as always, but fortunately we had a table, to watch the sun set.  Tim Ananiadis and his American wife, Jennifer, had a couple of retail specialists from the USA visiting and we talked about how main street shops had not foreseen the rise of online, just as so many hotels had not anticipated disruptors. But this hotel is always ahead of the game. Stay here, and a staff member can take you sightseeing off the beaten track. And up on the rooftop, learn to make tapas at a new outdoor kitchen just behind the main restaurant – but you can still see the Acropolis, as it grows yet more magical by night. This is a luxury hotel that always comes up with something new. I SPENT THE NIGHT IN DIVANIS CARAVEL’S SUITE 625