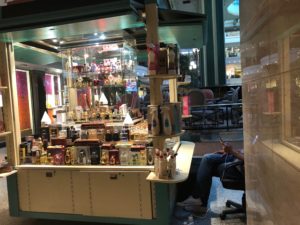 Perfumes in First Mall (see the vendor on his device) 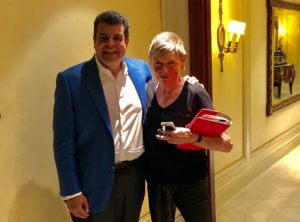 Half the screens seem always to be showing soccer, especially if national hero Mo Salah is playing. This unassuming 26-year old, currently playing forward, #11 with Liverpool and #10 in the national team, is renowned not only for his soccer but his philanthropy. I was show to suite 807 – a palest strawberry smoothie hue, throughout – by the duty manager who could not stop raving about Mo Salah’s good works, later confirmed by the GM.  Really, Mahmoud El Keiy is something of a problem solver. The casino on the 269-room hotel’s 4th floor extends right out to the pool terrace. He has persuaded the owners to move the casino to another floor so that its current conservatory-like structure can add an extra ballroom to the inventory. Four Seasons Cairo at the First Residence will thus be going after bigger weddings.  He has dispatched front-desk check-in and conciergerie to an intimate ground floor location, which means the former, elaborate third floor space – see the photo at the top – has become an elegant all-day tea lounge. A part of this is being hived off for the ultimate burger bar, opening October. 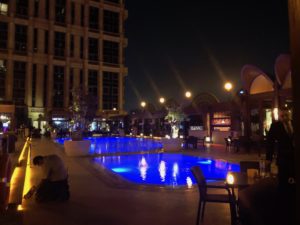 The pool, at night

Four Seasons Cairo at the First Residence is beloved of really high net-worth Egyptians – those, whom I believe to be in a minority, who do NOT want to be seen. It is noticeable, I think, that there are more Millennials among guests here, and, unlike competitors, it has a noteworthy complement of US guests, plus Brazilians (ergo the burger bar?). There was always a Levant restaurant, Aura, by the pool but Mahmoud El Keiy has added nine serious cabanas, all with big television sets and folding glass doors to allow air-conditioning.  We dined outside, in the open, pairing, in my case, Aura’s babaghannouj, and grilled mixed seafood, with Cape Bay. Some at neighbouring tables smoked shisha (warning for first-time visitors to Egypt, people smoke cigarettes, like everywhere, including hotel corridors, and, again everywhere, the no-smoking section of a restaurant might well be cramped, with the least-desirable tables). 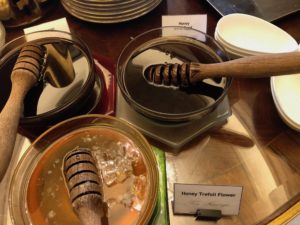 Honey on the breakfast buffet

First time visitors to Cairo may well choose Four Seasons Cairo at the First Residence for a variety of reasons. You have the zoo, and, from 11.30 a.m. through to midnight, daily, the hotel’s integral First Mall, offering everything from perfumes to the Armani-to-Zegna retail array.  You also have an eternally-smiling, always trying to go one better, team of 255, for whom nothing is too much trouble.  Before breakfast, and definitely before 11.30 a.m., I needed a basic item of toiletry.  No problem, the concierge sent someone somewhere else, and brought it to me within 20 minutes. The same thing happened when I asked for a hard copy of the New York Times. At breakfast, dishes that included a selection of honeys are all meticulously labelled: ask for something, and it is brought at lightning pace. The Mercedes driver, taking me on, asked if I had my passport and money, and had I had a good time? AND NOW, FIRST SUITE 807 AND THEN THE FIRST MALL