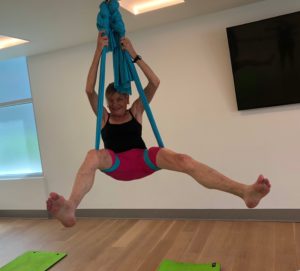 Well, after all that eating at Westroc’s super Valley Ho, the mid-century hang-out for successful Scottsdale-area hipsters, it was time for the gal to look at Westroc’s newest hotel in town.  Mountain Shadows Resort is indeed a brand-new property, opened only March 2017, although there was an earlier resort of that name, built in 1959 one block west.   Del Webb’s Mountain Shadows became Marriott and was later pulled down.  Woodbine Development and Westroc went in, bought the land next to the old property’s famous 1961-vintage Arthur Jack Snyder golf course, and put up a stunning edgy resort, a futuristic three-floor building by local architects Allen+Philp Partners, with interiors by Brooklyn NY-based Markzeff. (Was it Zeff who thought of the brilliant, or at least super-taxing, idea of ceiling-hooks that allow curtains to be suspended, for aerial yoga that culminates in the six-foot-wide fabric being opened up to provide after-class sleeping-pod hammocks?) 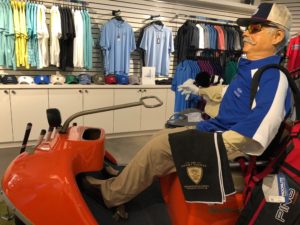 .. and an ancient golf cart

Yes, there is lots of exercise at this lovely hotel.  I counted and it was 100 of my steps, namely 100 metres, from top floor room 346 to the elevators. This is because the property is so cleverly designed that all rooms have a view of Camelback Mountain – see the photo above. Westroc has brilliantly brought just enough history into the ‘new hotel’.  In the golf clubhouse, there is a really old golf cart, with a dummy in it: around the walls of the clubhouse are old photos (oh how black and white photos last so much better than today’s colour images!).  The clubhouse leads into Rusty’s, the indoor-outdoor club lounge named for Rusty Lyon, whose son Scott Lyon, with his indispensible business colleague Bill Nassikas, is making Westroc the growing force it is today. 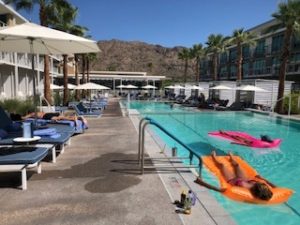 One of two 25-metre pools

But Mountain Shadows is not all history.  Think of that old golf cart and then understand that today’s buggies, to go round the short-course par-three Mountain Shadows Golf Course (re-imagined in 2007 by Forrest Richardson) has a fleet of EZGO golf carts RXV – there is also a buggy-conversion Wine Waggon, taking ice bucket-chilled drinks to thirsty golfers, and participants, locals and hotel guests, in hotel outdoor yoga sessions, ground-set rather than aerial (hotel VP/GM Andrew Chippindall says a big favourite from the wagon is a John Daly, a vodka-spiked Arnold Palmer, which is iced tea and lemonade).  This is a hotel oasis that cares about feeling better, in every respect.  I was really attracted by the weekend brunch menu, which included an ‘interesting’ dish described as roasted asparagus and ancient greens, which also came with shiitake, turnips and ricotta salata.  See what appeared, left.  I think I would describe it as a kind of porridge but actually, contrary to my lifelong distrust of any such concoction, it tasted really good.  And I am sure it did me good. 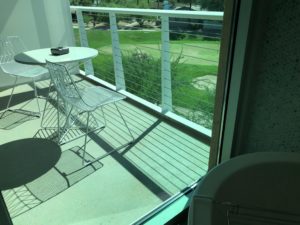 View from my bath tub

In fact staying at this luxury resort did me good too. An hour before a car was due to pick me up I decided it was time for a bath.  How many tubs have terrace views?  What was Aman Delhi had bathtubs on outdoor terraces, which one shared with unwanted pigeons who used to fly over and do what birds do, from time to too-frequent time.  Here the tubs are inside, but with full-wall windows on to the terrace and the view of Camelback Mountain.  As all top hotels and resorts should, but not always do provide, I had a sachet of easy-open bathsalts (Red Flower, in this case), and I can honestly say that such a soaking complemented magnificently my last night’s beet salad and prime rib roast-of-the-day dinner, at Hearth 61, named for the original Mountain Shadows launch, and this morning’s ancient greens porridge.  And I was still recovering from aerial yoga.  This was indeed an unforgettable experience, staying at Mountain Shadows Resort – and as if I had not eaten enough already, I was given a goodybag of snacks on departure. AND NOW TOUR ROOM 346