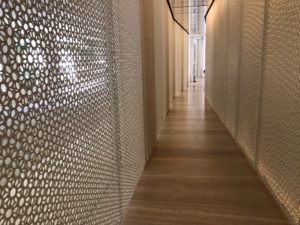 There had been talk for some years of W coming to Tel Aviv, such a vibrant and edgy city that can well compete with, say, Miami Beach on so many fronts.  Interestingly, Aby Rosen, owner of W South Beach, bought what was to be W Tel Aviv and somehow decided the project needed to be differently positioned, as a Luxury Collection hotel. The Jaffa, as it is now known, opened August 20th, 2018, and has instantly gained world acclaim.  Look, above, at the chapel, now de-sanctified, of the convent of the Sisters of St Joseph, from whom Rosen’s company RFB Holdings, leases the building. The chapel is breathtaking, with original stained glass, restored walls and ceilings, a bar replacing the altar and, instead of paintings of saints, enlarged photos of stars who have played significant religious figures, Richard Burton, Montgomery Clift, Bing Crosby, Anthony Quinn, Frank Sinatra and Spencer Tracy. At weekends, says the gal, the chapel is an evening club open to the public: other days it hosts yoga classes, and it can be rented for private events. 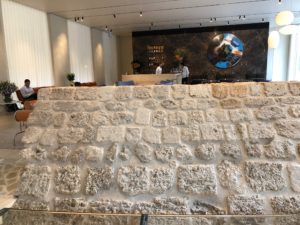 Beyond the lobby’s medieval wall is a Damien Hirst

Goodness knows how many hundreds of millions this all cost.  As well as restoration of the chapel and he whole of the heritage block, the entire courtyard outside was lowered by one floor (trimmed flat-topped trees, now acting as eight-foot high umbrellas, mark the original floor level). Abe Rosen asked his local architect, Rami Gil, to add a new block to the original four-floor convent, which gives in total 40 historical bedrooms in the old block, and 80 in the six floor new block. One entrance is via a pedestrian walkway through a narrow marble-floored passage, its walls already indicating that, throughout the new area, there will be countless examples of fretted white sheeting (the holes are miniscule compared with the much-admired exterior wall covering at Emiliano in Rio de Janeiro). You can also enter, direct from the limousine arrival, straight into the memorable lobby, with its marble flooring, a protruding 12th century wall, discovered during excavations, and, set around, a pair of circular Damien Hirst paintings worth at least a million (US) each, and two dark bronze anthropomorphic sculptures by George Condo, a one-time punk musician diverted to art by Jean-Michel Basquiat. 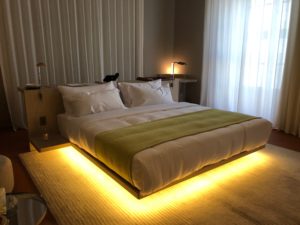 In bedroom 409, in the new wing, the only art was a memorable full-colour photo of a tree.  The room is, well, monumental. How much marble could designer John Pawson fit into a space that is no more than 400 sq ft? The marble, which extends under the bed’s foot-wide overhang, and over the bed’s headboard and throughout the bathroom, is relieved by masses of mirror, including a ceiling-high panel that incorporates the television.  The designer hates intrusions.  Even bathroom taps are low-set, flush with the vanity surround (which can cause a bit of a challenge to fashionistas needing to store dozens of makeup pots).  Talking of fashionistas, next month the highly-admired L. Raphael beautician opens up here. What a coup: last week a bride had pre-event blemishes and, ahead of opening, Ronit Raphael flew in specialists to sort the young lady out. 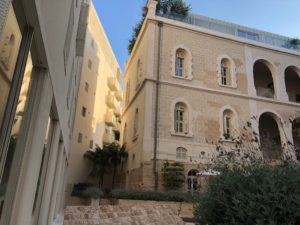 Old, on the right, and new…

The lasting impressions of this high-investment luxury hotel include the brilliant architectural marriage of old and new, as the photo on the right shows.  Abe Rosen has not stinted in his spend. There is a lovely outdoor pool and a high-standard Precor gym, open 24/7.  Also, the food concept is brilliant.  A partnership with New York-based Major Food Group MFG sees a really attractive Manhattan-style Mediterranean brasserie – sit in, or as most prefer, outside, in the welcome shade of that arboreal ‘umbrella’.  There is also a fascinating looking daytime brasserie, Golda’s Delicatessen, with dozens of photos of that formidable woman.  Clever move, Mr Rosen, and I hope to tell you so personally one day.  Well done. AND NOW SEE A DESSERTS SELECTION, AND THE HOTEL IN THE MORNING, AND ROOOM 410