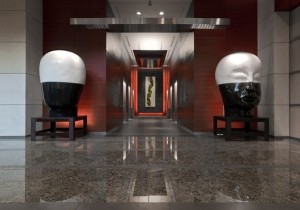 Nagoya-born Jun Kaneko works in grand scale, whether he is creating in ceramics or, as above, in bronze. Two of his giant heads are, somewhat suitably, in the luxury Grand Hyatt Tokyo hotel, a mammoth structure that is part of Mori Hospitality‘s Roppongi Hills complex. This includes the Mori Theater, and numerous office and residential blocks – the hotel itself has 387 rooms but there are 865 people working in it as there are ten restaurants, all busy, and big banquetings and about 600 weddings a year (there were ten yesterday, says the gal, noting that it was traditionally a lucky day). 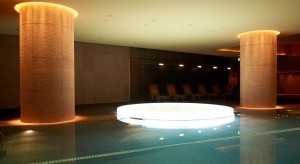 The pool, with inset hot tub

The art was placed throughout the hotel by consultant Neal Menzies. The design throughout is actually pure art, too, by several geniuses. Look at the striking simplicity of the pool, with its inset hot tub, and all-wood surround: this is by Takashi Sugimoto of Super Potato, and it was a welcome touch to have, among the serious hardbacks in my room (this hotel caters for the intelligent) the fascinating Super Potato Design: The Complete Works of Takashi Sugimoto. It was displayed next to a perfect, artistic display of strawberries, from Tochigi Prefecture, according to the card (this is also a hotel for detail lovers). 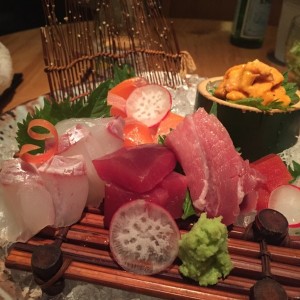 We dined in Shunbou, also designed by Sugimoto-san. This could best be described as a ‘natural’ concept in that the bar counter is formed of a giant, and I mean giant, slab of Mikageishi granite from Kagawa – as if it was decided to drop a restaurant into natural landscape. I was with the hotel’s passionate GM Steve Dewire, who moved here from outside Austin TX in April 2014. Now I know Texas has fabulous food but I bet he never had sashimi like this before coming here. And after the sashimi we went on to vegetable tempura, light as a feather (according to the excellent Washoku Way: Japan’s Nuanced Approach to Food, published by the Japanese Government’s Ministry of Agriculture, Forestry and Fisheries, the lightest tempura is fried in sesame oil). 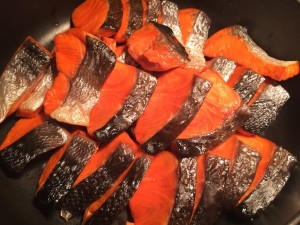 Colour is such an important feature of Japanese cuisine. In the tenth floor Club Lounge of this luxury hotel, a dish of orange salmon near yellow flowers was almost Braque-like – see the video below. But there is colour throughout the hotel: I love the Grand Chapel, like an upturned golden boat hull soaring up to 55 feet, and, for Shinto ceremonies, a light shrine reached by an ultra-dark foyer. Both these rooms undoubtedly attract lots of business, processing those 600 or so weddings every year.