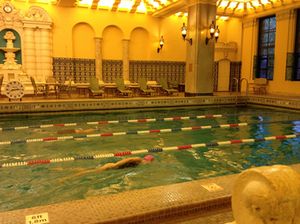 Chicago’s early 20th century architecture is without parallel – that is why the gal really seriously recommends an architectural tour when you are in this fabulous city. Face south from InterContinental Chicago and you see, from left to right, the city’s first air-conditioned building, the William Wrigley Jr, vintage 1919; the flat-topped Equitable Building, a youngster at only 48 years; the toaster-topped 1922 Elie Saarinen design for the Chicago Tribune, the young (1973-vintage) flat-topped Aon Center; the neoclassical London Guarantee & Accident Building; the wedding cake-like 1926 Jewelers building, with car elevator to indoor parking as extra security for all that gold…. But here, at the luxury InterContinental Hotel, you are in one of the elite. The gal marvelled at the dedication of those who put the 42-floor beauty up, in 1929. 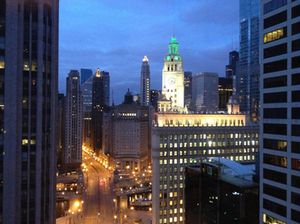 The first of its two towers, the Historic Tower, was to provide 440 bedrooms for the Medinah Athletic Club, owned by the 3,500-member Shriners Organization, a Masonic sibling.  In those days, members had an 80-foot pool, which still amazingly exists, and a 23rd-floor miniature golf course with water hazards, a shooting range, a boxing ring, a gym and much else. Today, stay in what is now a 794-room hotel (a second tower was added in 1971) and, in some of the rooms, say 2302, you have a view south of some of the city’s other architectural delights.  But nothing beats this building, designed by architect Walter Ahlschlager. 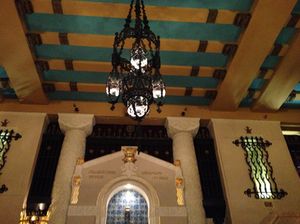 The exterior is limestone, from Indiana, with decorations that extraordinarily hark back to Ancient Assyria – were those Shiners incredibly erudite or were they showing off?  You can still see relief carvings there, in Old Assyrian style. Three friezes, their figures in clothing of fifth century BC Mesopotamia, illustrate the necessary disciplines needed to construct a monumental building. There is Contribution, facing south; Wisdom, facing west; and, finally, Consecration, facing north.  Above the main outside door is a somewhat bastardised Middle Eastern greeting ‘Ed salumu aleikum’, Peace be to God.  Inside, many public areas, including that incredible swimming pool, have elaborate columns, wall and ceiling decorations. 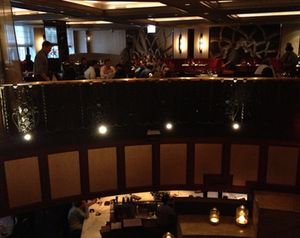 .. although one two-floor space is now, brilliantly, Michael Jordan’s restaurant (bar beneath)

One giant area, ground floor and the floor above it (second floor, in North American lingo) are now one of Michael Jordan’s three eponymous restaurants – the other two are in New York and Uncasville CT.  You go up 24 steps from the ground floor to the floor above, and over a new glass bridge to make your way back, so to speak, to above his packed-full bar below; this has ten beers on tap, sports screens a-blaring, networkers networking as hard as their lungs will allow.  Designed by Michael Dalton and Alison Delaney, the 160-seat restaurant above is, by comparison, calm. A big 23 on a shield is a reminder of MJ’s number (did I count the steps right, should I have counted 23? I need to go back). 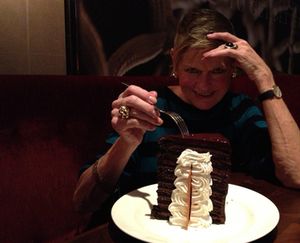 Yes, the cake has 23 chocolate layers

The restaurant is managed by Jordan’s own long-time food partner, Myron Markewycz. Go for a chopped salad, and it has 23 different ingredients. Servers all have favourites on the menu, but the eye is caught by the first main-course item, MJ’s Prime Delmonico, a dry-aged ribeye with ginger-balsamic vinegar jus – this, according to the listing, and there is no reason for disbelief, is only 16 ounces, thank goodness (though boy, it does taste good). But the signature dessert, as shown here, is the 23-layer chocolate cake.  I counted‘em, did not eat’em all. Even one mouthful must have had 23×10 calories… 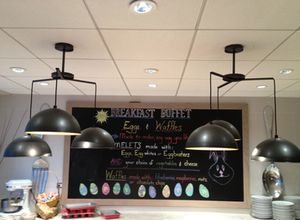 Waffles are extensively advertised, at breakfast

About four years ago the then-owning boss of this historic hotel, one-time chef Laurence Geller CBE, decided to bring it up to date.  Not only did he start talking to the Michael Jordan restaurant guys, who happen to be called Cornerstone Restaurants.  He had already turned one corner of the hotel into an ENO wine and chocolate bar, and another into a Starbucks.  Getting Michael Jordan into the main slot opening off Michigan Avenue was brilliant. But he had not finished. This luxury hotel has a cleverly versatile space on the (American-style) second floor, Continental.  It has an open kitchen, can be used for functions but is, every day, serving breakfasts. One six-year old one morning was besotted by the waffle selection… she could not make up her mind.