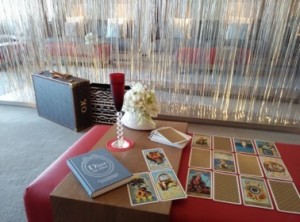 The Sybaritic Single – who wrote this guest column – adores luxury hotels with a quirky sense of humour, which also has to be light, chic and innovative. It is even better if the humour involves art as well.

Last week, as the he was rushing to a meeting – which eventually might as well change the taste of French gastronomy in the near future – the Sybaritic Single stopped by a palace on Avenue Hoche for a glass of Champagne and to charge his phone. While leaving the mobile with the concierge, he noticed a renewed display of the hotel’s artistic boutique. The Sybaritic Single was still not prepared to get those provocative ‘cocaine-heroine’ salt and pepper shakers, but suddenly his sight fell on a sleek black coffret signed by Salvador Dalí. The box kept a glossy deck of esoteric tarot cards inside.

Already in his favourite airline lounge waiting for departure, the Sybaritic Single laid out the cards in front of him, and following instructions of the booklet, predicted what was going to happen next. The Ace of Cups – in Dalí’s surreal interpretation, a Cup with two wings, or two faces looking at each other – was a clear indication that the time was right for La Pyramide of Champagne prior to flying to the next destination.

However, as the angel’s wings on the card of Dalí turned into two faces looking at each other, the second meaning of the card came to life: everyone loves to have a bit of fun while travelling, and suddenly the Sybaritic Single got approached by a French cinema celebrity who had been until now watching him through the fiber-optic grass of the lounge. Being interested in the cards and the entire scene, the star asked for a reading – because travelling in whimsical elegance is simply inspiring and attractive. Both airlines and luxury hotels should just provide more means for doing so.