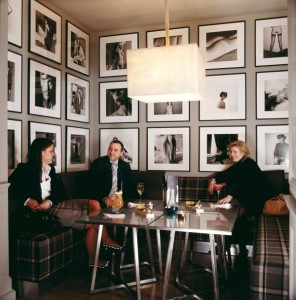 It is not often that a luxury hotel’s bar is themed, and so is one of its cocktails – but that, says the gal, is the case at Brown’s Hotel, London, one of Sir Rocco Forte‘s collection. Donovan Bar is named for the late photographer, Terence Donovan, as its walls are lined with some of his 1960s photographs of celebrities plus ‘real people’, as seen here. Head barman Martin Siska entered his Donovan Martini into the Diageo World Class Cocktail Competition 2010-2011, and it is one of the most popular drinks here. Want the recipe? 50ml Tanqueray, 20ml tonic water (no brand specified but apparently it should be flat), 15ml nettle cordial, 10ml lemon juice, a splash of Kummel, and a chunk of fresh pineapple. 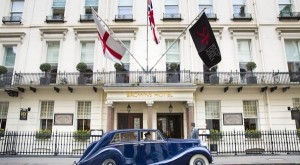 Watch Martin Siska make his best-selling cocktail in the video below. This is, by the way, such an elegant hotel: its main entrance, seen here, is in Mayfair‘s Albemarle Street but you can also enter via Dover Street, parallel to it. There were originally, in the middle of the 19th century, two hotels here, Brown’s on Dover Street (run by Lord Byron‘s butler James Brown) and St George’s Hotel, Albemarle Street. During the years after, one or other of the pair hosted many really famous names. In 1876 Rudyard Kipling finished the Jungle Book here – the hotel has just unveiled a 2,000 sq ft, two-bedroom Kipling Suite. In 1876 Alexander Graham Bell made the first-ever phone call from here, to J.J. Ford, a full four miles away. In 1886 Teddy Roosevelt, two years after the death of his first wife Alice Hathaway Lee, honeymooned here with her replacement, Edith Kermit Carow. 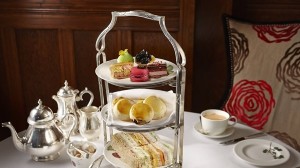 In 1905 another Roosevelt, FDR, honeymooned with Eleanor, From 1924 ex-King George II of Greece, uncle of ex-King Constantine, moved in for 11 years. At some point Agatha Christie, also associated with Jumeirah Pera Palace, Istanbul, based her book At Bertram’s Hotel on a stay here. I wonder if all those famous people partook of the very English afternoon tea? Every afternoon many of those staying at what is now a 117-room hotel join discerning outsiders somehow to find room for scones and clotted cream, and crustless finger sandwiches, and one-bite cakes (and some of them with a glass of Ruinart) – even though many of them may well have lunched with gusto off the English food that Mark Hix prepares (the gorgeous restaurant has no fewer than three traditional silver carving trolleys, which complement, admittedly magnificently, with the very-modern Tracey Emin light fixture on the far wall (‘I loved you more than I can love’). 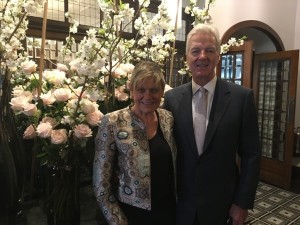 It is also notable that this luxury hotel is actually a power meeting place. Private equity blokes and ladies from offices around in Mayfair often choose to meet here, away from their colleagues. From early morning on they sip coffee, in one of the lounge’s back rooms, and, later, in Donovan, or, once afternoon tea starts at 12 noon, they lavishly spread home-made raspberry jam and cream on to their scones. Yes, this is the epitomal English hotel, run by the very model of a modern-major GM, Stuart Johnson – all his friends and admirers were so happy when he was deemed top hotelier of 2013 by his peers, members of the Worshipful Company of Innholders (another oh-so-English institution).