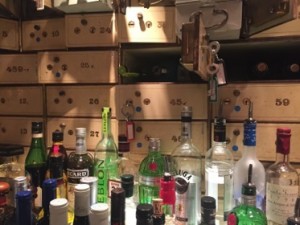 Oh the history that the gal finds in luxury hotels, especially in conversions. Taj Cape Town has added a former bank, adjacent to the main hotel. The exquisite Waldorf Astoria Amsterdam is a skilled transformation of six adjacent merchants’ palaces, all 17-18th centuries, along Herengracht. One was a bank at one time and a few of the safe boxes have become decoration behind the main bar. The meticulously restored houses, by the way, now form a tastefully relaxing 93-room hotel, with rooms either facing the Herengracht canal, or the quiet garden behind, that apparently blooms with over 8,000 tulips come April. Thanks to historian Peter Vlaadingerbroek, we now know that the three-floor houses typically had higher ceilings for the raised ground floor, where meetings and withdrawing took place: a semi-basement below, and attics with windows, provided storage. 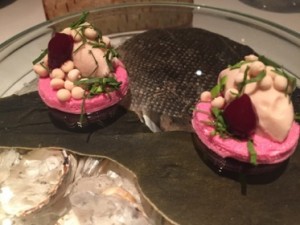 As well as the beauty of the buildings, and the interiors within, this hotel is truly noteworthy in that in November 2014, precisely six months after opening, its Librije’s Zusje (Librije’s Sister) restaurant got not one but TWO Michelin stars (the chief inspector for Benelux had never heard of such speed). Let me just show two examples. First, one of the five amuse tasters, each as awe-inspiring as the others – this one is beetroot meringue with haddock. Of course the room is faultless, with crispest cloths falling to the wood floor, and pulled-thread rectangular napkins that fall, as if on an altar, almost to that floor. Caramel orchids lying horizontal on the table exactly match some of the really comfortable chairs, and also one of the butters – the other, goat’s milk, is pure white. The young servers move silently, smiling, and come whenever you are about to think you need them. 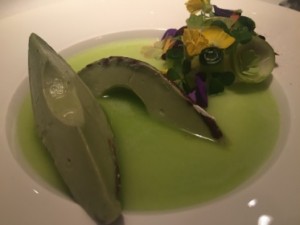 I wanted to try ginever, and restaurant manager Sascha Speckemeier suggested a tasting. He brought two tumblers, different heights, for easy identification. Both with Fever Tree tonic, there was the harsher, 100% juniper, Bols ginever, and the more-enjoyable Monkey 47 gin. I was going to choose a mushroom starter from the seven-course vegetarian menu, but this skilled professional steered me to abalone from à la carte, which arrived, chrysanthemum size and shape, with studs of beech mushrooms, chorizo, combava (kaffir lime) and extra-dry Gouda. My main course was slow-cooked seabass morsels, with artichoke, Pearl Imperial caviar, smoked eel, and lovage. And then look at my dessert. What looks like avocado sections is in fact avocado sorbet, with a chocolate ‘skin’– and poured around it, at table, was a sauce of Chartreuse, green apple and cucumber. When we left, we were each given small pots of honey from the hives on one of the hotel’s roof terraces. Attached were recipes, for Sascha Speckemeier’s honey berry swirl and the more complicated soufflé kwark, from the chef, Sidney Schutte. 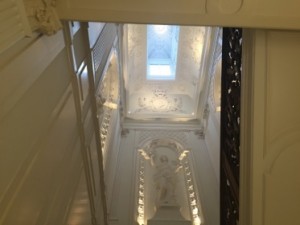 Looking up at the stairwell of the Marot House

The hotel‘s MD, Roberto Payer, had been working on the creation of Waldorf Astoria Amsterdam for over five years. A great admirer of the Zwolle De Librije three-star Michelin restaurant in Zwolle, he arranged for its owners Jonnie and Thérèse Boer to bring an offshoot here. I was bowled over not only by that dinner but by the way, a few hours later, the room was converted into a truly luxurious breakfast venue (tables’ horizontal orchids removed, and a central table that last night was primarily cheese display now bearing part of the breakfast buffet). Roberto Payer has put so many touchpoints into this luxury hotel. There are sculpture displays both in the garden and the corridor leading to the good Precor gym and the Guerlain Spa (where as many local men as women go for regular facials, apparently). At night, your bed is sprayed with the exact fragrance you chose when you checked in. And, overall, wherever you look, around and up, you are reminded of the style in which those merchants lived nearly four centuries ago.