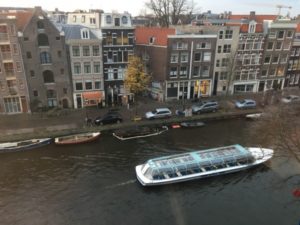 You will have guessed, perhaps, that when asked if she has any allergies, the gal comes up with two, one of which is the word ‘boring’, boring people and boring hotels. Hotels that are fun and lively, for all ages, invigorate and enthuse, and make consumers want to return, and those who work there are much happier to start every new day. Andaz is one of the brands that is invariably fun (think the sky-high chairs in the lobby of Andaz Tokyo). The modern-luxury Andaz Amsterdam hotel has so many fun elements it is difficult to know where to start. Enter through a quasi-tunnel of flower-filled vitrines into a lobby which includes a five-floor open atrium. 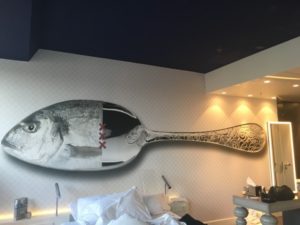 The wall behind the bed

Soar up in glass-sided elevators and you rise through an illuminated art display – see above – designed, like the entire 122-room hotel, by its co-owner, the justly-celebrated designer Marcel Wanders. Up in room 411, first I look out, over Prinsengracht canal, and then I look around my space, which I am sharing with a ten-foot fist printed on the wallpaper above the bed (note the lucite headboard). Note also the freestanding vanity unit that is really quite handy: its one Villeroy & Boch basin, by the way, is deliberately splodged in Delft blue, and the XXXs on the unit’s side are Amsterdam’s logo. By contrast, the shower is hidden behind mirrors which are see-out-only one-way glass, and white doors hide the walk-in closet, and the toilet stall. I have a Nespresso machine with Bodum glasses: water glasses are Riedel, toiletries Zenology. 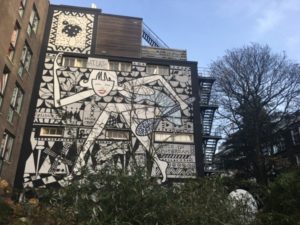 Like several Amsterdam hotels, this one has gardens between the entrance block and a building on Keizersgracht, which also has bedrooms. There is a subterranean tunnel, red-lined (for the city’s Red Light district, though the 43-total art videos that play day-long are considerably less seamy) – the spa, and the LifeFitness gym, which unusually is 24/7, are down there but I walk outside, to look up at Alice in Amsterdam, a mural by Jan van Iwaarden. There is art everywhere; the hotel’s other owner, Paul Geertman, is an architecture graduate who is closely involved with the city’s Museum of Modern Art and three different pieces arrive, every month, for short-term loan. 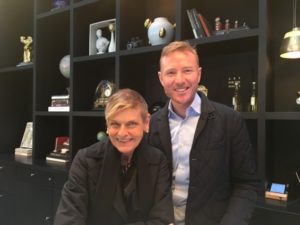 .. and Johan in the lobby

Johan du Plessis, who is elevated to Hotel Manager as of January 1st, 2017, is as enthusiastic about this luxury hotel as his entire 115-strong team. Over dinner in Bluespoon, which sensibly can now be reached directly from the lobby (taking down one wall has doubled the average number of diners), he reminds me of the free wine-tastings offered every night, between five and seven. I start with a typical Dutch dish, grilled Zeeuwse mussels with warm potato salad, and we finish with Juan’s chocolate mousse, at-home-like ladled out of a big serving dish, with jugs of salted caramel and vanilla sauces on the side. As for breakfast, it really IS like being at home, as you wander among the chefs to pick up what you want.   FOR MORE OF BREAKFAST AT THIS RESTAURANT-THAT-HAS-A-HOTEL ATTACHED, SEE THE VIDEO BELOW