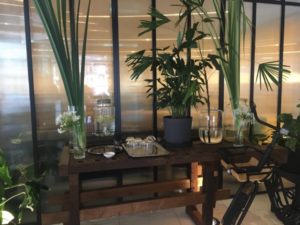 A bike and greenery at Kimpton DeWitt

Sometimes, in this eternal and always invigorating search for luxury hotels around the world, it is great to follow a theme, even temporarily, says the gal. Take lobbies, which range from the deliberately claustrophobic of Hotel Costes in Paris to dozens of light airy spaces in China and Japan, or those hotels where you rise from the ground level, by elevator, and emerge to what seem like designer football fields (say Aman Tokyo or Andaz Tokyo, and Park Hyatt Shanghai, or, in the USA, The Peninsula Chicago). In Amsterdam, the ground floor lobby at the Pulitzer is reached by an outer, black-lined space with flowers-to-buy, to one side – see above. A real grand piano hangs overhead. There are bicycles close by. There is a real bike, with lots of greenery, inside in the main lobby of Kimpton DeWitt Amsterdam. 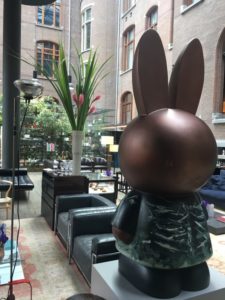 Miffy at The Conservatorium

The lobby at The Conservatorium is a four floor-high glass box formed by architect Piero Lissoni to enclose what was a three-sided brick building. This space now houses real trees and 12-foot high glass show cases of china: there is a lobby lounge, popular for afternoon tea. On front desk, a tray holds a couple of dozen old-fashioned hotel bells, the kind you push hard to make a noise, to get attention. Nearby is a moveable gin-and-tonic table, publicising the fact that the hotel’s own Taiko gin, which uses wasabi (its flavour of the month) is now outselling its previous number one, Hendrick’s. An addition to the lobby is this statue of Miffy. The rabbit is one of several children’s characters invented by Dutch author Dick Bruna in 1955 after he saw a rabbit hopping around while he, Bruna, was on a family holiday (the name Miffy is a diminutive for the Dutch konijntje”, “little rabbit”). 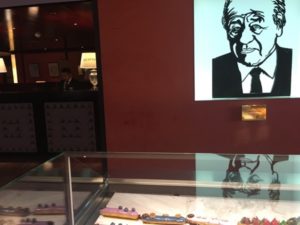 Continuing the lobbies-of-Amsterdam theme, we come to Amsterdam’s doyen of the luxury hotel world, the 1896-vintage Hotel de L’Europe, uniquely owned by Heineken. Jeroen Henneman’s back-lit silhouette of the late Fredy Heineken greets those who climb the five red-carpeted steps up from Nieuwe Doelenstraat: he is looking down, it seems, at a display case of delectable éclairs, some with icing. The lobby in the main is a tomato red, from carpet to walls and highlights in some of the eight-foot Rembrandts – copies, of course – that are hung both sides, with gigantic crystal chandeliers overhead. In summer, many go to the far end of the lobby and down stairs to the outside terrace, which can do over 120 on a fine evening (my suggestion is also to take a canal trip on the hotel’s cruiser Hilda, same vintage, 1896). 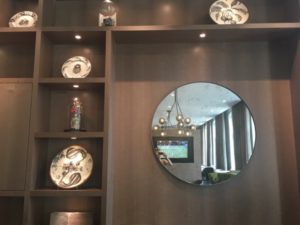 Finally, on the lobby tour, head to Jaz in the City, in the modern entertainment and sports part of town, Zuidoost, and you might coincide with the weekly Saturday pop-up fashion display, with everything for sale. Go to the even-newer Hyatt Regency luxury hotel, and, every day, the lobby is an impromptu workplace for local residents, who obviously relish an ambience with a living wall and masses of greenery, and a handy to-go deli.